You may have heard of the Bitcoin fork, but did you know that Litecoin launched a fork as well?

Litecoin is an Altcoin that emerged in 2011, 2 years after Bitcoin was created by Satoshi Nakamoto. 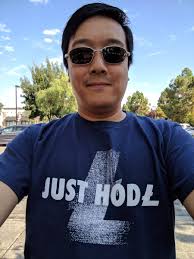 It is basically a clone from the original Bitcoin Core initiated by Charlie Lee with a few fundamental differences.

The creation and transfer of its coins is based on an open source cryptographic protocol similar to Bitcoin.

But its block confirmation takes 2.5 minutes instead of 10 minutes and it has a maximum supply of 84 million coins compared to Bitcoin’s 21 million.

Charlie wanted to ensure that the security was maintained but the speed was quadrupled. This means that you can send money literally anywhere in the world 4X faster than Bitcoin. But the caveat is it takes 4X the hard drive space to record all those transactions daily.

Bitcoin still is the gold standard because of its first mover network advantage. It is also more secure because of the distributed nodes and hash power. And that is why its more expensive (still only 7-21 cents to send any amount of BTC).

Note: Users are paying the fee to be able to send their monetary value across the network quickly and securely without needing banks. 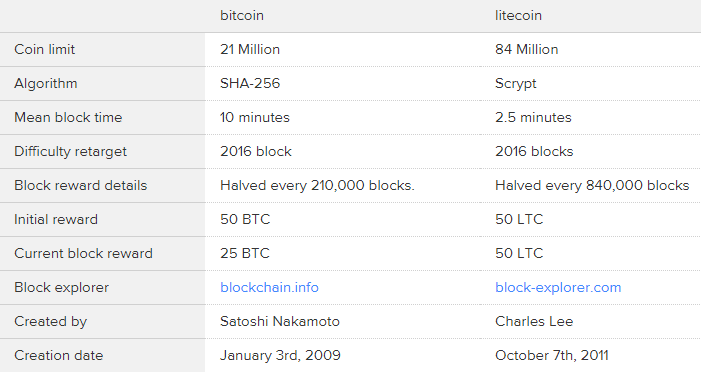 In many countries, Litecoin still isn’t trusted to be an official means of payment compared to Bitcoin. You still need to purchase BTC before you could exchange it for some Litecoin.

Its creator, Charlie Lee also decided to unload all his Litecoin holdings citing future conflict of interest. He likens to compare Litecoin as the silver to Bitcoin’s Gold.

How Can I get Litecoin?

You can easily purchase Litecoin directly from Changelly or you could buy BTC first via your local exchange sites, before changing it on trading sites like Binance.

You would first need to purchase a hardware wallet. The safest wallet for newcomers is the Ledger Nano S or the Trezor.

The logic of a “Fork”

The price fluctuations in cryptocurrencies can vary from one extreme to the other because of a phenomenon known as a “fork”.

Forks can occur from two separated events. The first is if coin updates stay incomplete and the two different versions of software become incompatible; so now the developers need to decide how to merge different blockchains, this is what we call a “soft fork”.

And the hard “fork” happens when the developer acknowledges that changes must be made to the programming system; and if this occurs, the users of the coin in motion must be willing to update their applications in order for that coin to continue to be used successfully.

Bitcoin was the first crypto to undergo a hard fork and that resulted in major split in the blockchain that created Bcash. 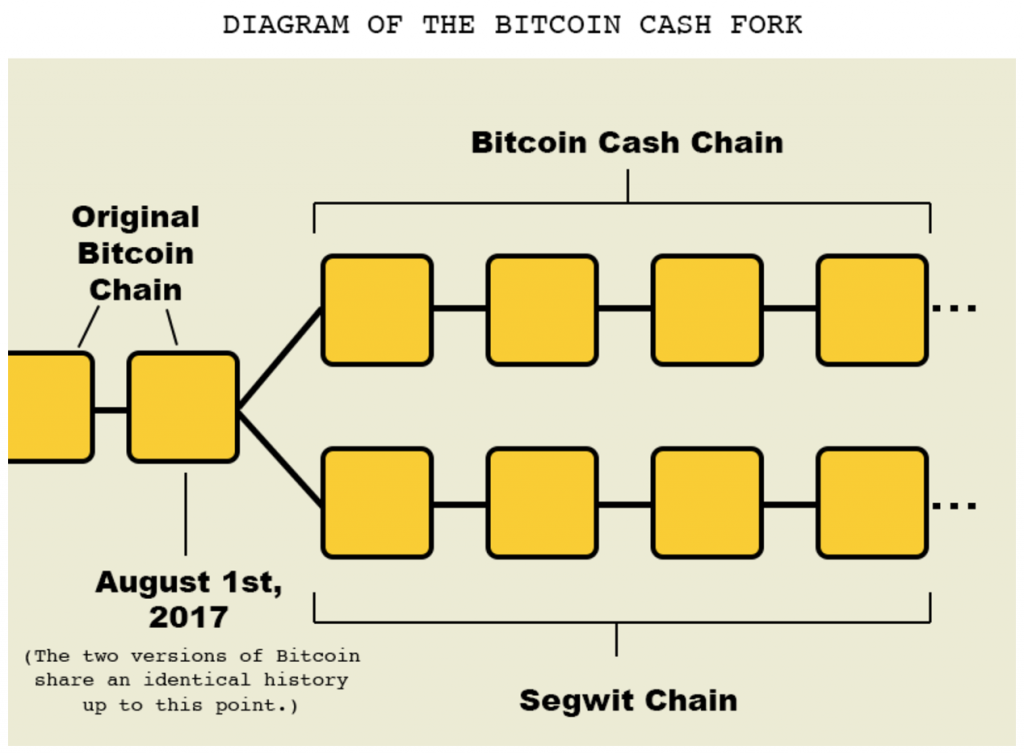 The Litecoin fork on the other hand created Litecoin Cash or LCC. Litecoin Cash‘s developers admit they have no ties to the official Litecoin project and don’t particularly see it as a competitor.

This “forking”, according to their developers, is a new cryptocurrency that uses an existing code base to create a newer and better form of online exchange with a mining algorithm similar to the Bitcoin (SHA-256).

Due to the mechanics of the fork, anyone who previously own any Litecoin at the time of the fork will immediately have a portion of Litecoin Cash. 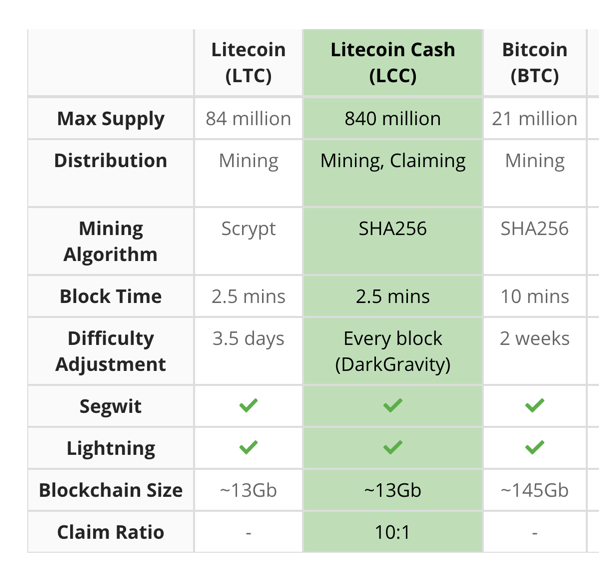 The Litecoin hard fork is currently out in the market and it goes by the name Litecoin Cash (LCC). This fork happened on 18th Feb 2018 at the 1371111 Litecoin block, which means that anyone holding 1 LTC at block 1371111 will have 10 times as much Litecoin Cash. 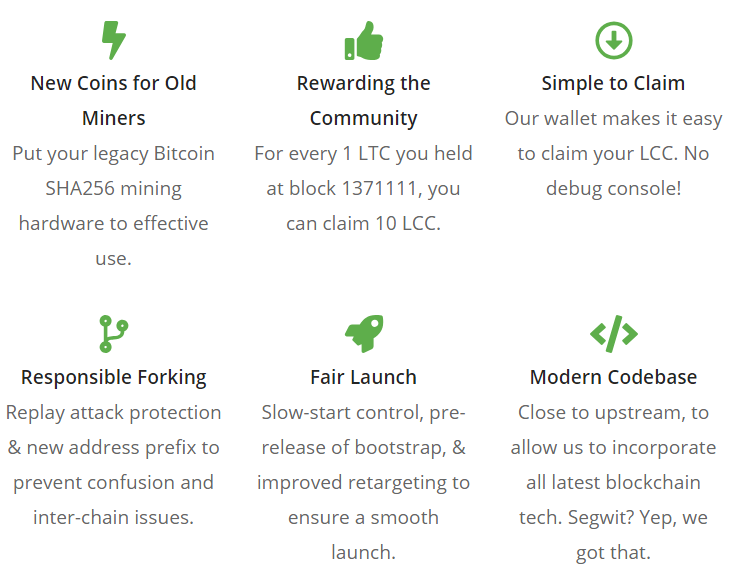 The unique specifications of Litecoin Cash (LCC) is not just trying to mint new coins out of thin air, but to add new features and improve viability as a cash replacement. Some of these are: “the legacy of SHA256 mining hardware which makes it easy to mine LCC”, “it’s easy to claim through the digital wallet”, “a responsible forking to prevent an inter-chain-issues”, “a codebase that allows to incorporate all latest blockchain tech” among many others.

The developers behind the projects 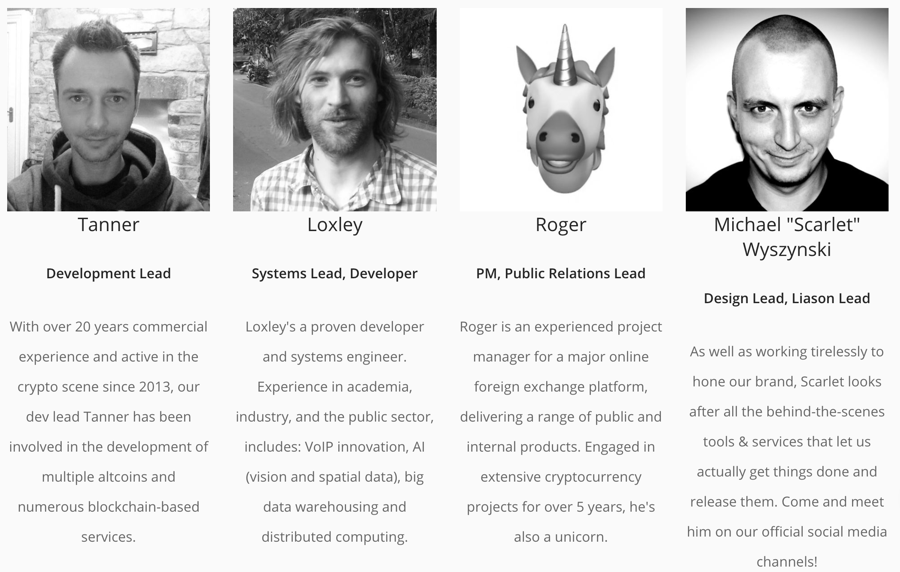 Tanner, a Litecoin Cash lead developer who did not give his full name, said to CoinDesk “Community engagement is the key to success for any coin. I think that, ‘Hey, you already own this, why not check out what we’re doing?’ is a good jumping off point for people”. This statement makes you think that the “free coin giveaway” is there to create a network faster than Bitcoin with lower transaction times; or at least that’s their goal.

Despite all the negative tweets from Lee the cryptocurrency markets had welcomed this fork and we’re seeing a lot of support for Litecoin Cash (LCC), like Coinomi Wallet declaring their support for the LCC fork through their mobile wallet app.

Also Yobit, a well-known Russian based Atlcoin exchange service established in 2015, and the Coinmarketcap markets are supporting LCC. Of course, there are other supporters that are listed by LCC via their website, like Mercatox, and many others.

Remember forks can occur anytime, and to any cryptocurrency. Being informed improves your chances of owning additional coins in the market. So subscribe to our email newsletter here.

You can easily purchase Litecoin easily at the best rates from Changelly then you can change it for LCC on any trading sites listed above.

Coinzodiac cannot verify the safety of these wallets. Do not enter your private keys in any of their websites.

Charlie Lee, the original creator of Litecoin, had very antagonizing remarks about Litecoin cash through his Twitter account:

PSA: The Litecoin team and I are not forking Litecoin. Any forks that you hear about is a scam trying to confuse you to think it’s related to Litecoin. Don’t fall for it and definitely don’t enter your private keys or seed into their website or client. Be careful out there! https://t.co/qXbiIxp5Al

Before buying LCC, you have to take into account of the following factors;

Here's What You Need to Know About Bitcoin and Blockchain