Due to Bitcoin’s rising popularity and increasing transaction fees, it has become impractical to use Bitcoin for small transactions. Bitcoin has a 1Mb memory block size limit which was implemented to prevent spam and make it popular globally.

Why was the limit was implemented?

The limit was implemented on the capacity to allow the demand and supply dictate the transaction costs. However, there is a negative trade-off between security and cost of transactions.

Bitcoin is the first cryptocurrency and it has shown the world what it is like using a decentralized cryptocurrency. It faces scalability problems due to a limited number of transactions it can process.

Scaling is not something we’re going to solve. Scaling is something that we will improve continuously over time.Andreas Antonopoulos 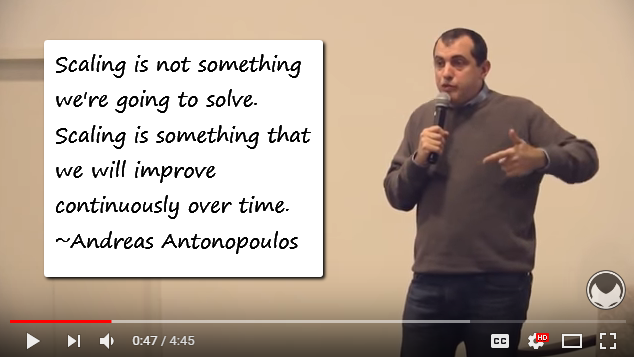 Bitcoin is the tokenized representation of security in the blockchain, and the blockchain is a distributed data structure that provides security.
Adam Back, the inventor of proof-of-work system hashcash and the co-founder of Blockstream

Bitcoin Cash 8 Mb Block Bitcoin Cash with a limit of 8Mb per block was created to solve issues associated with transacting using Bitcoin.

If Bitcoin cash is widely adopted, it will still be expensive to transact using them. Bigger blocks take too long for miners to mine the currency as transaction files take longer to travel in the 8 Mb network.

Bitcoin has the largest network and it was built to disrupt the entire global financial system by offering a decentralized method of exchange.

Bitcoin faced a contentious hard fork and Bitcoin cash was a result of Bitcoin’s split. The battle between the Bitcoin and the fork is open on all fronts. The two sides are constantly being attacked on the network with denial of service (DDoS), majority hash rates, and in every other possible way. It is a battle between the software development team and how quickly they can maintain the code to keep uptime. The hard fork has allowed the Bitcoin to test all the possible attacks, such as attacks on the network, nodes, hashing, relay network, etc.

The hard fork has allowed the Bitcoin to test all the opposing scenarios. It is rising up as a battle hardened cryptocurrency which will have survived a fork attack.

…And we will better understand what happens under such highly contentious conditions.

Again scaling is not something that can be solved entirely right from the beginning. It is something that bitcoin aspires to keep pushing back at the frontier.

Bitcoin will be attacked through its mining, the network, legally, and every other possible way.

If you don’t think Bitcoin is going to be attacked, you’ve misunderstood what this is about.

Bitcoin has been dealt with the real scaling problems being the largest blockchain network in the world.

If somehow bitcoin cash overtakes bitcoin and gets to this scale, they will have to deal with the same scaling and governance controversies.

Other altcoins also need to scale to the level of Bitcoin before claiming to have solved the fundamental scaling issues that bitcoin currently faces.

While bitcoin cash emerged as the third-largest cryptocurrency in the world for a brief moment last year, it is still fairly early to compare it with the established networks of the original bitcoin.

After bitcoin cash was added on Coinbase and GDAX, its price briefly hits $8500 before collapsing back to $3500. It was then plagued with claims of insider trading and pump and dump operations. Bitcoin cash also has 92% of their blocks being mined by only a couple of miners.

That’s why many people believe that Bitcoin cash’s price is artificially inflated for short term profit.

Bitcoin cash is at the moment too centralized.

You don’t go and poke a $20 trillion industry and go, “Hey, we’re going to disrupt you!” You can’t just wait for it to roll over. This is offensive to a lot of governments, rich institutions, and a lot of people who don’t want to see Bitcoin succeed..Andreas Antonopoulos

Bitcoin is widely distributed globally and it offers equal mining opportunities to everybody. A limited number of miners hold a large stake of Bitcoin cash and it is not widely used for transactions like Bitcoin. Fundamental Issues Bitcoin and Bitcoin cash, both have fundamental scalability issues. Bitcoin aimed to deal with the issues with Segwit that aimed to change the rules and allow more transactions per day in the long run.

Bitcoin cash does not solve the fundamental issues with the cryptocurrency. Bitcoin cash’s increase in block size cause mining problems and after a certain level of scaling, its transaction costs will increase as well. Alternative Currency Bitcoin cash has no unique value proposition. It does not solve any real problems and it is not as widely accepted as Bitcoin. There are many other alternate cryptocurrencies that are much faster than Bitcoin cash and offer very low transaction fees. Bitcoin cash is trading on the brand value of Bitcoin and it has little to nothing unique to offer the traders.

We’re used to financial systems in which there is zero noise or drama.Andreas Antonopoulos

Centralization Bitcoin was developed to offer the world a decentralized, encrypted and secure transaction system free from the control of central banks and governments. Bitcoin cash is heavily centralized and its future developments lead to further centralization. Unequal Mining Advantages Bitcoin cash is primarily supported by miners who are profiting from ASICBoost, an ASIC exploit. ASICBoost allows a small group of miners to mine Bitcoin cash with far greater efficiency than anybody else.

To Sum Up Bitcoin Cash does not have anything valuable to offer and it does not truly solve the scalability issues of Bitcoin. Many alternative cryptocurrencies offer far better scalability solutions and lower transactions costs than Bitcoin cash.

Why Bitcoin is Not Truly Anonymous

How do I make money with bitcoin?