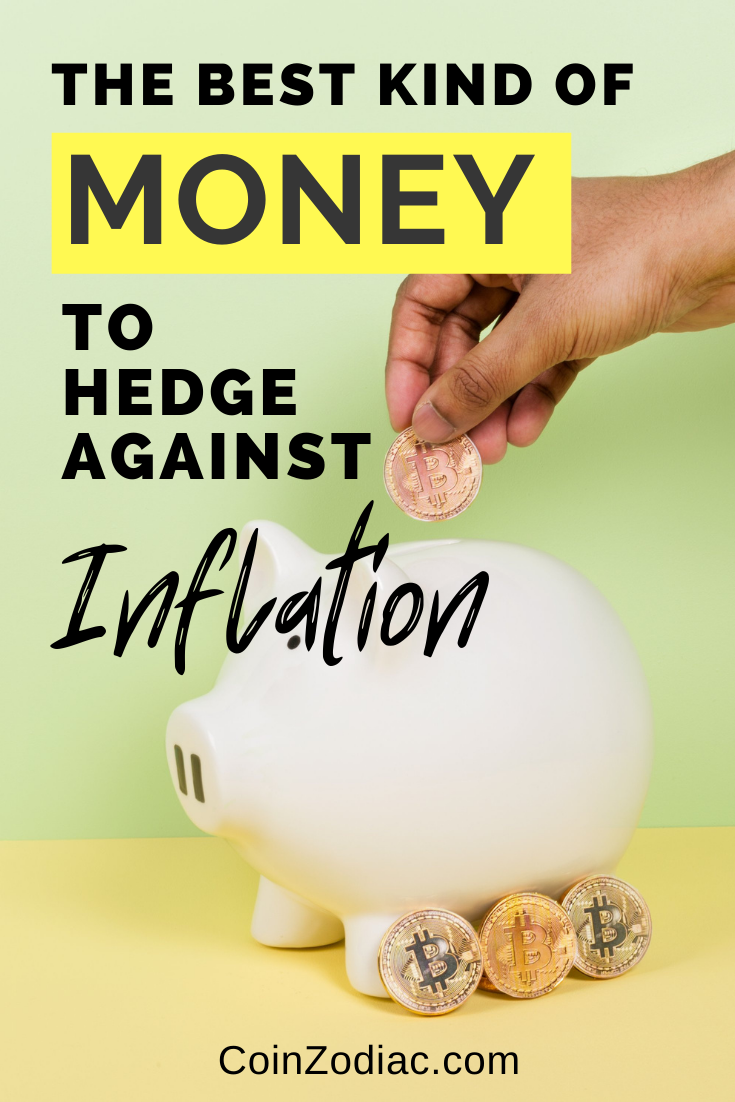 What the HELL?!! They raised the price of my favorite chocolate bar.

More precisely; they actually shrunk it by 20% in weight.

I can now only get three bars for the price of four with the same amount of money, so I’m buying it more often.

Raising prices is one thing. I understand raw-ingredient price rises will be passed on.

But underhandedly reducing the amount they give you … just feels not right. It’s dishonest.

I’m sure you’ve noticed it too. How food costs are edging higher each day.

Everything you buy in supermarkets gets smaller.

You don’t need a researcher to tell you that, It’s bloody obvious they have shrunk in size.

With trillions of dollars more being airlifted into this pandemic-recovery economy, the coming months is going to get uglier.

Not only do we now have to deal with “Shrinkflation“, but also worry when inflation gets out of hand.

Have you considered how you’ll deal with rising costs? Are you sure your future income will even keep up with rising inflation?

Be honest: will you have enough cash to rely on? What’s your plan? 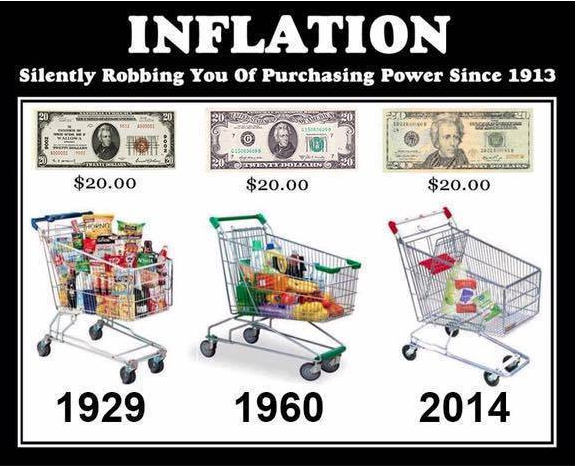 Cash is fast money. We use it for immediate exchanges of value.

You sell, I buy; we negotiate the value on either side of the balance sheet (What are your goods worth to you? What is this service worth to me?) by collapsing desire to an integer.

Cash is bits and atoms.

If you work for a living, chances are you rely on cash on just about everything.

That’s why you use cash to buy something more durable, something that is not easily liquidated or valued in fast money.

This is called Medium money.

Real estate is a good example of medium money.

IT takes years for home prices to rise and fall, many days or years to buy and sell them.

Your house is what you use to store your fast money when you’ve got more of it than you need for your immediate purposes.

Cash can crash or hyper-inflate into valueless scrip, but if you converted it into a farm or a road or a home, you will still have your medium money at the end of the fast money apocalypse.

Most people don’t know these types of money by name; indeed, those of them who focused on the uses of capital mistook medium money for a special case of fast money. (The knowledge of money isn’t free. You have to pay attention.)

So the bubbles and crashes that rippled through their fast money systems frequently caused misery and massive infrastructure damage.

The subprime mortgage crisis of 2007 is an example of that.

People who couldn’t afford homes or get approved for loans were suddenly qualifying for subprime loans and then choosing to buy homes they simply cannot afford.

That caused housing prices to skyrocket, creating a huge bubble in the process. At that point buying a home simply became an act of consumption instead of a reliable store of value. (like owning a washing machine or a computer)

Eventually, the bubble burst in 2008 and millions of people were devastated. They didn’t own anything, instead they lost all their savings.

Medium money is stable for the long term – until it is not.

Sure, it is a better store of value than fast money, but it’s highly illiquid.

You have few options to sell in the short term. Even less freedom.

If I change my mind about what I bought, I might not be able to sell it for a long time. That is the trade-off.

When price inflation takes off – something I see as an inevitable outcome – nobody’s current standard of living can be maintained even with medium money.

Right now how worried are you about your currency declining relative to how worried you are about how your other assets are doing?

If you’re like most people, you are not nearly as aware of your currency risk and you need to be.

When the consequences of runaway debt, out-of-control deficit spending and money-printing schemes come home to roost, we need a way to diffuse the impact this will have on our purchasing power.

We need a strategy to protect our standard of living.

How can we accomplish this?

Bitcoin is a new form of slow money that exhibits gold-like traits of scarcity with the transactionality of cash.

It’s the kind of money that offers both a great store of value and abundance of liquidity.

Bitcoin is hard to produce and even harder to inflate at will.

It is the ultimate store of value designed to outlast the rise and fall of civilizations.

It is the currency of world-builders, running on an engine of debt that can only be repaid by the sweat and tears of our children, passing the liability ever onward into the deep future – or forgiven by the Jubilee.

By design, Bitcoin does not have a central command center. It garners the shared belief in a native internet currency that’s free from nationalistic ideals.

The network is Open. Neutral. Decentralized. Censorship–resistant and Immutable.

Every exchange between two parties is permission-less. (No need to go through an intermediary.)

It takes 10 minutes on average to confirm a transaction once. After six confirmations, the chances of a transaction being invalidated is less than 0.1%.

It’s theft-proof, too – for each bitcoin is cryptographically signed by the mind of its owner.

It is becoming, in a very real sense, an aspect of freedom and identity for the sovereign individual.

That’s because Bitcoin is intrinsically Internationalist.

Millions of traders are distributed across the world, there are thousands of Bitcoin meetups happening in hundreds of cities, and every major nation state is aware of Bitcoin.

The very slowness of Bitcoin guarantees that it isn’t vulnerable to bubbles and depressions and turbulence and the collapse of any currency that is subject to the whims of political forces.

Owners of slow money believe in delayed gratification. That is to resist a smaller but more immediate reward in order to receive a larger and more enduring reward later on. 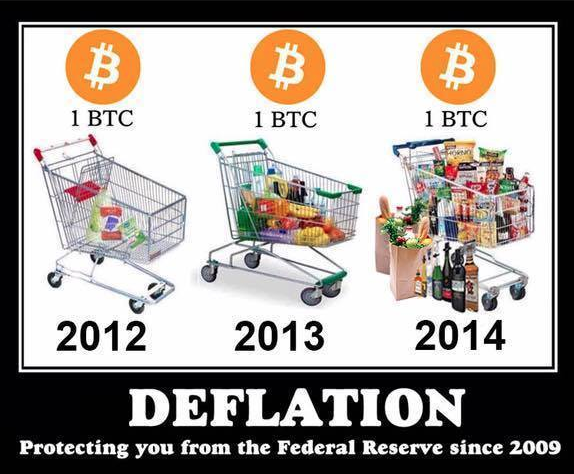 Recollect a memory from your childhood. Try to remember that tree growing in your yard. How much did it grow this week? No idea, right? But now how much has it grown since you were a kid?

Generally, it is challenging to relate Bitcoin to slow money. But I can help you identify what it does that ensures your nest egg’s growth is guaranteed in terms of purchasing power.

Don’t be fooled by the day-to-day bitcoin price fluctuations. (Volatility is a sign of nascency and high liquidity)

Once you see the pattern, you can’t unsee it: 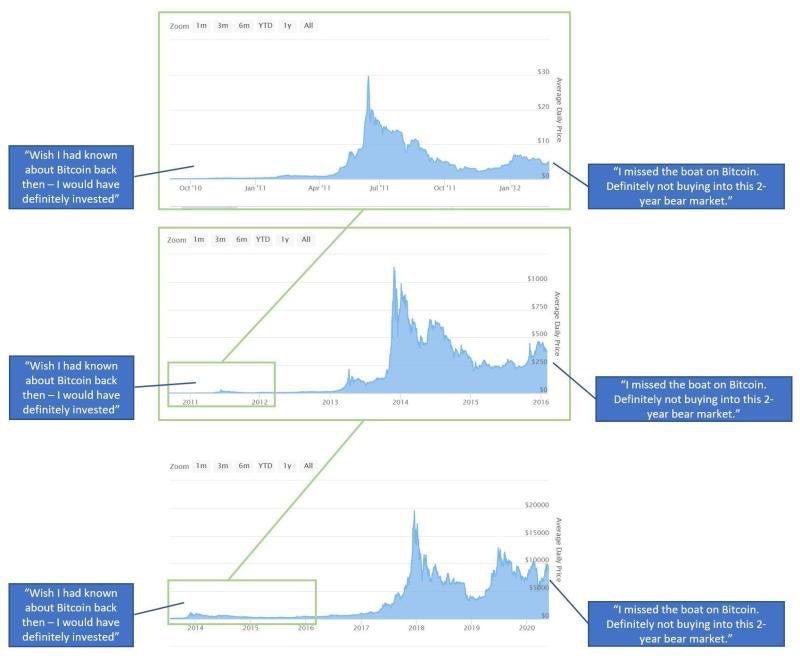 This pattern is called the Bitcoin Cycle of Regret.

It is exactly how it is for most people, hearing about Bitcoin in the headlines, and not making any attempts to own it each time.

It’s usually funny how a few weeks of stable Bitcoin prices gets people complaining about how “boring” Bitcoin is. (Usually known for its volatility)

Then all of a sudden, outbursts of price volatility grab the headlines in mainstream media.

… and the cycle repeats itself again.

As far as trying to understand recurring patterns, it is helpful to understand that each cycle will play out until all of the speculative functions of the asset disappears completely. (Speculation is important for discovery/Gold also got off to a rocky start.)

And each time it (the circumstance, the pattern) returns and is ignored, avoided, or otherwise left unattended, the Universe reminds you… with an even “bigger” and “louder,” headline, recognizing that perhaps you didn’t notice it or weren’t able to hear the messages inherent in the (former) circumstance.

This happened to me in 2017, when Bitcoin started making the rounds in major investment newsletters. 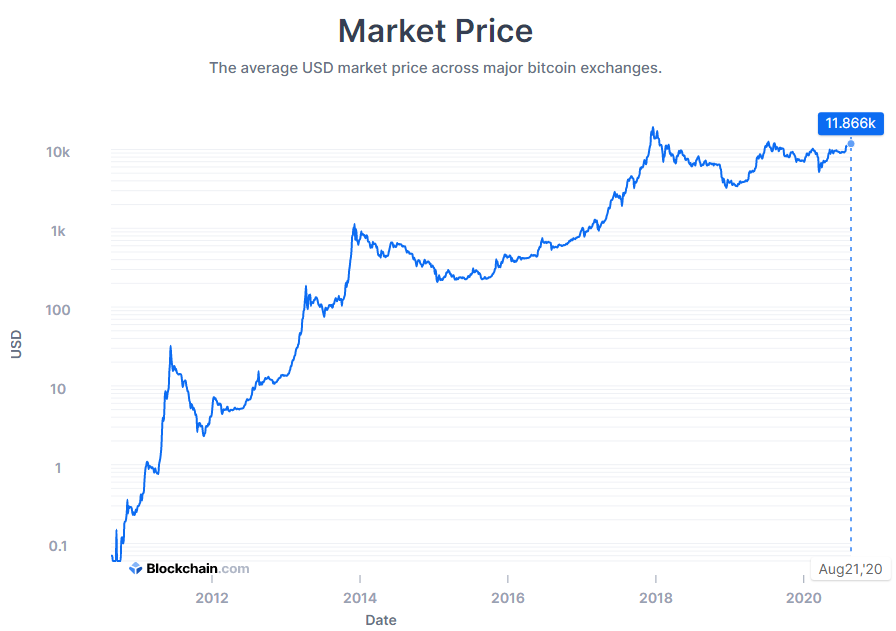 From those humble beginnings, an entire movement evolved.

Hundreds of believers were exchanging ideas, discussing developments, proposing and testing cyphers on a daily basis.

Then, as more people got involved, their needs became more apparent.

Until now, cash has played its part.

A society based on the internet required a new form of digital cash.

So early attempts were made towards building such a system.

It’s a co-evolutionary process, where everybody is optimizing according to their knowledge and incentives.

The 21st century will eventually defeat the 19th. Few understand this. https://t.co/9pGm2szGHl

Arguably, some of the most brilliant minds were hard at work for almost two decades building The Internet of Money.

It led to the discovery of Bitcoin.

Decentralized digital money is an incredibly important part of our future.

Do not get left behind.

Fast money gets all the positive attention and headlines in the beginning, but being patient and right drives the biggest outcomes in slow money.

That’s why it’s an important distinction to understand that Bitcoin is a Savings Technology, not a get rich quick scheme.

It’s a get rich slow scheme.

Saving bitcoin in a focused way for the longest time will see your purchasing power rise above the rest in an economy that’s awash with fast money.

Today I’m recommending you take a two-prong approach towards bitcoin. First, everyone should have access to the real BTC.

Buy Bitcoin, Get a taste of getting some on the banking platforms of the future.

Second, Regain ownership of your money.

Secure your BTC with these offline bitcoin wallets: Ledger | Trezor

Earn using the Brave Browser – Regain ownership of your data!

How Monopoly Celebrated the Death of Middle Class Families