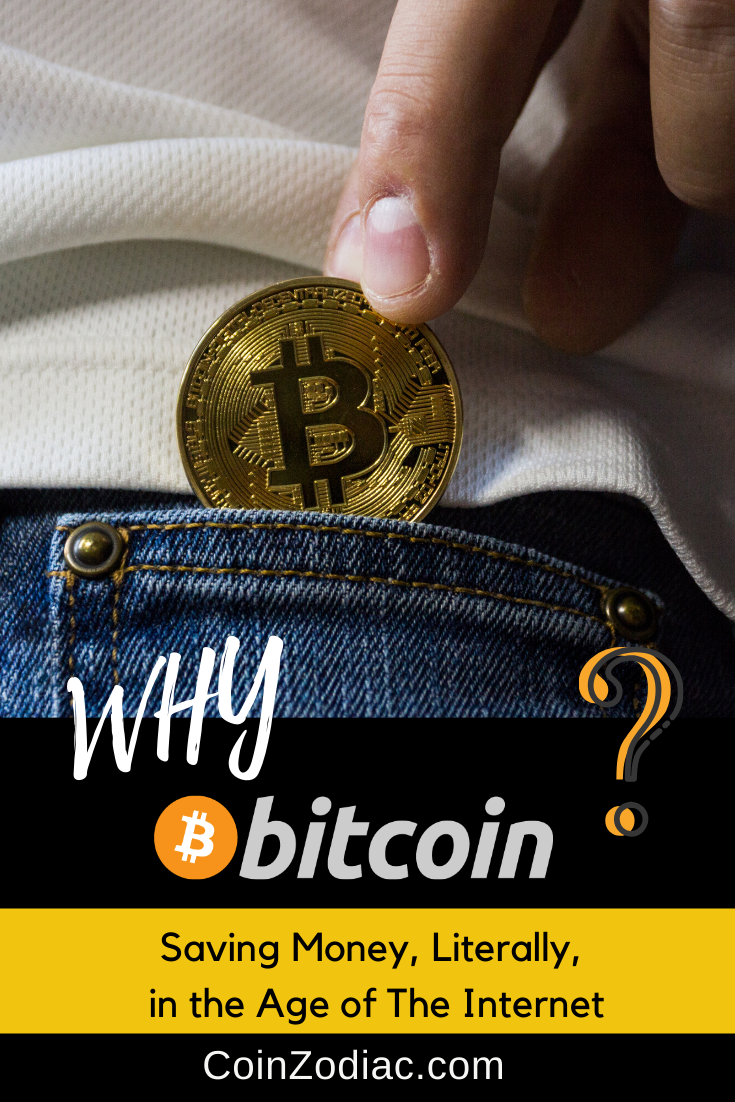 It broke the cartel of information.

Information is our source of knowledge. It’s power.

It can no longer be used to serve the purpose of enslaving the people like it did in the past.

If people are dumb and stupid, they’re easier to rule with an iron fist.

Born on the internet as a native, it broke the cartel of finance.

“Financial institutions make people feel safe by hiding behind layers of complexity. Bitcoin brings risk front and center and brags about it on the internet.” Elaine Ou, Global Financial Access.

If people don’t have a clue how our money and financial system works, it’s easy to deceive and mislead them.

Bitcoin removes the need for banks.

Banks who are so used to debasing our purchasing power.

An economy flowing through the internet will need to be shaped by profound mathematical truth instead of a magic wand.

Bitcoin allows us to store value in a protected realm of cyberspace in which no one has any say on our money.

You can send it anywhere in the world directly to the recipient without depending on a central authority.

You can verify its authenticity spontaneously with adaptive mechanisms that aren’t reliant upon conscious decision-making that are prone to human-error and bureaucracy.

But why is the price of bitcoins so volatile?

Is the current price of Bitcoin an indication of its slow and gradual demise?

The answer might not be what you expect. Here’s why…

Bitcoin’s value has historically risen steadily over time, while the price volatility just seems to justify the attempt of the free market to find it. 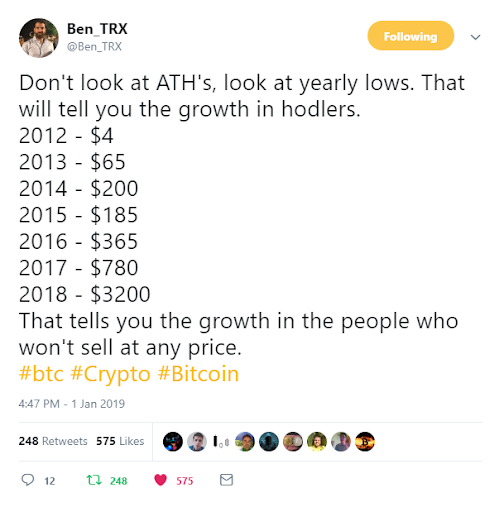 For the ones who invested their life-savings expecting to turn a quick profit during the 2017 bull run, hear this…

You were trapped by your own greed.

You were gambling, not investing.

Marc Andreessen who famously kick-started the whole internet movement told the Washington Post that we’ll look back in 20 years time and conclude that Bitcoin would be as influential as the internet itself.

The big difference between Andreessen and the rest of us isn’t that he’s much smarter, rather he’s more patient with he believes in.

Only long time preference individuals are able to see these kinds of revolutionary ideas play out.

Money disappears regularly in such volatile markets. Wealth never disappears,it is simply transferred to others.

As a newcomer whose sole concern is to make more money, you could be missing the whole point of Bitcoin as a get rich quick scheme.

It’s easy to get excited about a transformational technology, thinking it will change the world tomorrow and that adoption will happen overnight.

They thought they would literally be multi-millionaires overnight.

That however, took more than 4 years to materialize.

Not only that, Bitcoin investors had to endure 2 years of a serious downtrend that saw Bitcoin lost nearly 90% of its value.

This current situation with Bitcoin’s huge correction is striking parallels with the past.

So how can one predict the rise and fall of such volatile assets?

I can’t. Nobody can! Anyone telling you otherwise is more interested in bringing you in for a ride.

You see, most ordinary observations are based on the weather and not the climate.

We can’t observe climate directly, all we see is the weather — but the average weather, over the course of years, reveals a pattern.

It’s why those 10-day weather forecasts are so unreliable.

So keep an eye on the climate, not the weather.

Weather is extremely hard to predict, but the climate is highly predictable.

To predict the economic climate of the future , try observing citizens living in countries like Venezuela, Russia, Turkey, Greece, Iran or Zimbabwe…

Their fiat economy is dead.

The poor are victims of inflation.

Unlucky individuals are singled out and made examples for tax evasion.

Storing and moving money in banks is subjected to strict financial controls.

The government has literally sucked the life out of their free market.

They’re inept at managing the smooth operations of a modern global economy flowing freely on the internet.

The game of monopoly had never ever been in your favor.

You can work hard, trade your time for money. But at the end of the day, the central bank can always print more scrap paper.

For those who hodl Bitcoin, they understand that 1 btc will always be 1 btc now or in the future.

So for them, it is about saving and accumulating as many BTC as they possibly can without gambling away their financial future.

Someday, they might not even have to sell them at all.

Once a Satoshi (0.00000001 BTC) becomes a unit of account. 1 BTC could hold the value of millions of dollars in your own local fiat currency.

Sceptical? Look at countries that have to weigh their bundles of cash. 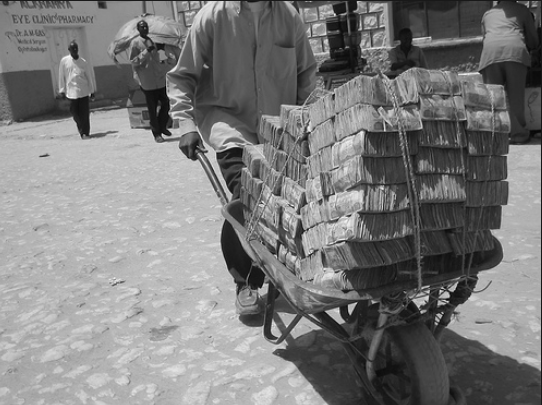 This is what happens when monetary supply is inflated over time. In this case, accelerate inflation and your economic climate is due for hyperinflation.

For those living in privileged economies (if you have a bank account, you’re most likely privileged) you cannot escape inflation as well.

All that corruption, sanctions and trade war is all about one nation gaining the upper hand over the other.

Look at Russia, Turkey, China, Iran and India; these top 5 countries are already working out plans to ditch the U.S. dollar.

Russia’s Putin said, “We don’t have plans to ditch the dollar, it is gradually moving away from us…”

It’s about politics, power and greed.

Nations and politicians don’t care if you store the bulk of your wealth in fiat money.

To them it’s all about authority, not freedom.

Freedom for taxpayers? All that economic spending is just an optical illusion of prosperity.

More fiat money is being created out of thin air in the last few years alone than the rest of human civilization. Global debt has tripled in the past 20 years, to $250 trillion.

Don’t think the financial collapse of 2008 will happen again? Sure take more loans to buy more useless crap, buy the house or car you cannot afford, spend on cheaply made plastic goods because you saw an ad on Facebook.

All these little things you do as a consumer add up over time (10 years to be precise).

What’s more, these central banks didn’t create or add any value to society, all they do is charge you interest rates and fees when you transact.

They can even lend you money which they don’t really have.

It is called fractional reserve banking. This is the epitome of printing more money out of thin air.

This fiat money is a great weapon of choice for politicians as well. Because it’s easy to control the masses of people when they’re in debt.

No politician or government can control and censor anyone from sending or receiving BTC.

The people that say Bitcoin is going to die don’t realize that it is almost certain that THEY will die first.

To kill Bitcoin, you will first need to kill the internet and every digital copy of the Satoshi’s white paper.

So it will most probably outlive me, you and everyone else today.

It has a non-zero chance of becoming the world’s first sovereign individual’s reserve currency.

Why Bitcoin Matters for Freedom 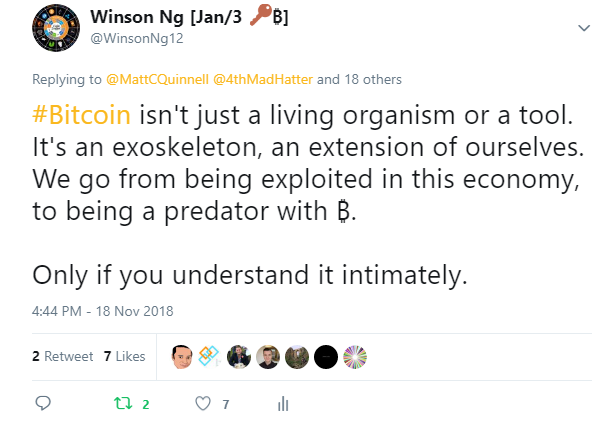 Alex Gladstein, an officer from the Human Rights Foundation published an article on TIME recently which tells the importance of Bitcoin when it comes to freedom for millions of people around the world.

In the article, he revealed how:

Gladstein concluded that Bitcoin has a real potential to impact the remaining 4 billion people in the world who can’t trust their leaders or even access financial institutions.

For many, Bitcoin is a way out, not an investment scheme to make more fiat money.

While you may have the privilege to access banking today, don’t let the public notion of speculation, fraud and greed in the cryptocurrency space stop you from learning more about Bitcoin.

One of the greatest challenge in life is knowing enough to think you’re right but not enough to know you’re wrong.

Hold some Bitcoin today as a hedge against an uncertain future.

You can always pass it down to your children knowing that 1 btc will still be 1 btc decades from now. Your local currency on the other hand will most certainly lose its purchasing power over the years.

Why Institutions Are Investing into Bitcoin Infrastructure