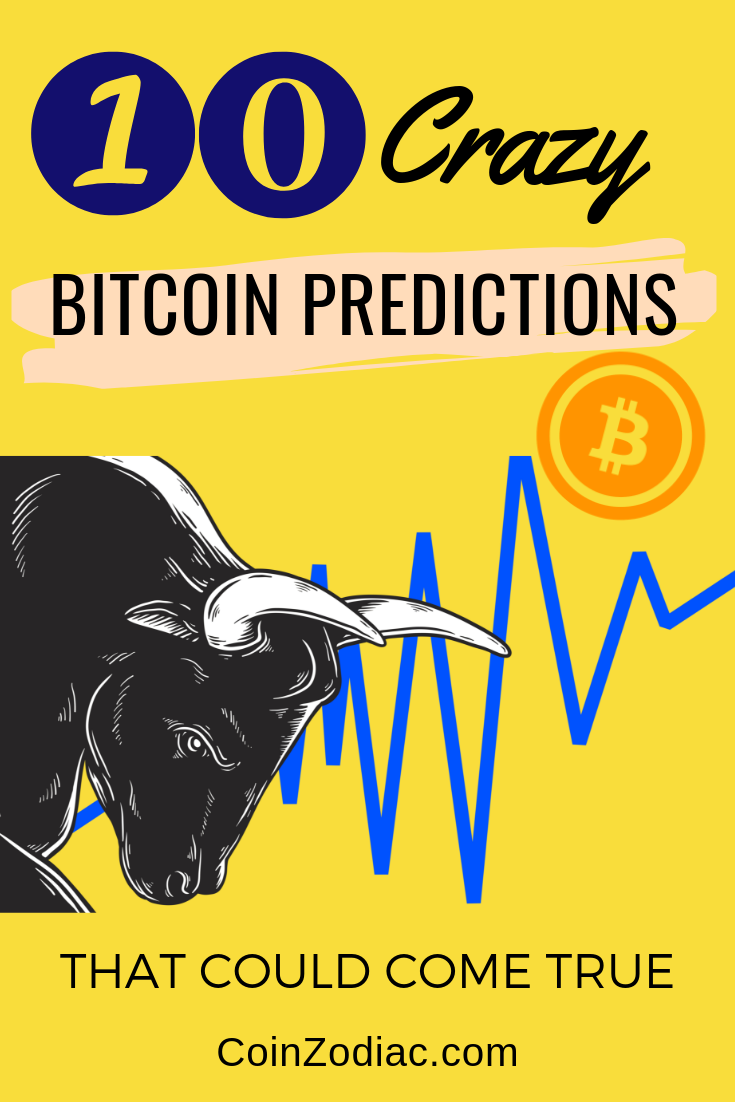 In 1903, experts at Mercedes in Germany were at the forefront of the automobile industry.

They predicted that there would never be as many as 1 million automobiles worldwide. As revolutionaries of their time, why were their predictions so myopic?

Well, they were being realistic. It was highly implausible that as many as 1 million artisans worldwide would be trainable as chauffeurs.

Yet, the world saw over 1 billion cars worldwide in 2010.

To dare a thought, is to risk being wrong.

The experts at Mercedes were afraid that they will get their due share of being ridiculed. And as you know the Germans, they cannot stand being made fun off.

Today, we see the lack of nerve and the failure of imagination occur all over again with ‘experts’ of our time.

Perhaps being realistic is part of the human condition. As much as some like to sugarcoat the crypto winter, the market did lose at least 85% of its value since late December 2017.

But, some bulls might still argue that the fundamentals of this space is growing stronger than ever.

On a long enough time-frame, we can only presume that since Bitcoin has a fixed supply of 21M units, that demand can only increase over time.

This would certainly leave an incredible upside to be captured by holders of bitcoin who are patient enough for mass adoption to kick in.

IBM’s Jesse Lund who heads their blockchain division certainly thinks so. In an interview at Think Conference, Lund suggested that $1,000,000 isn’t exactly crazy as it sounds since at that number, each Satoshi would be valued at $0.01.

He believes that speculators are currently holding back Bitcoin because they’re using it to make more fiat money. Adding more 1s and 0s to our bank balance sounds a little more insane especially when central banks continue to ramp up quantitative easing.

Hold on to your hats! We’re about to see which of these crazy predictions could come true. 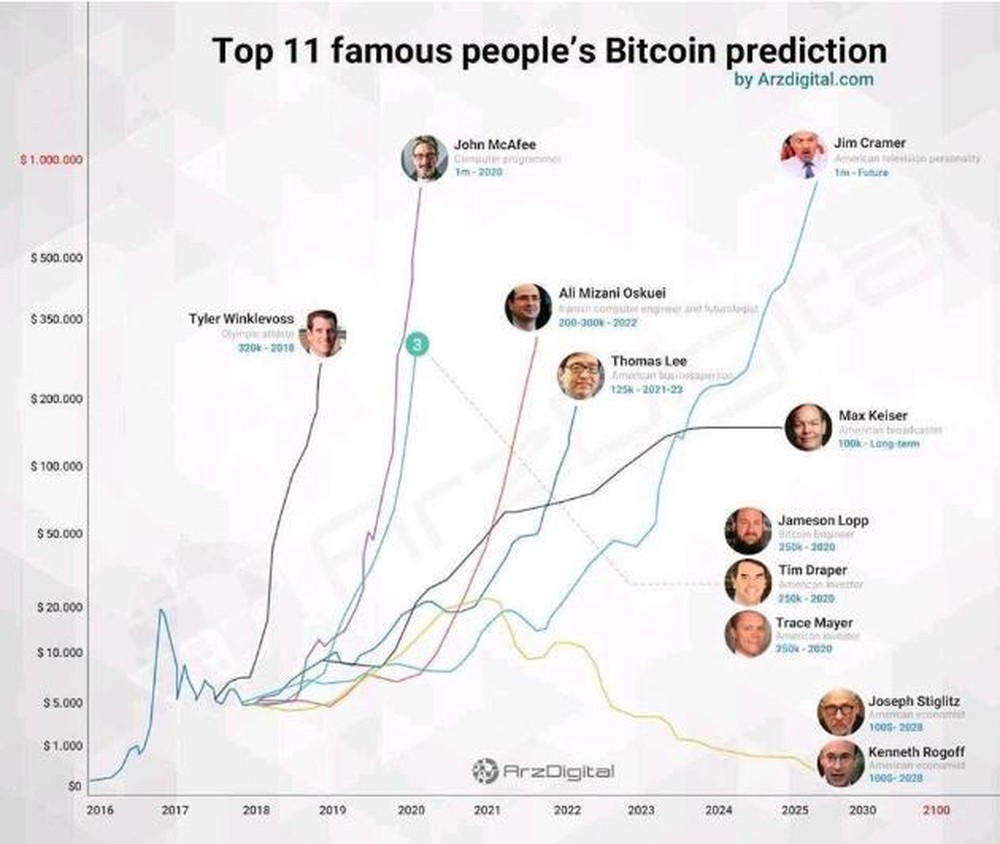 “Impossible for me to lose bet”

McAfee famously claimed in 2017 that if Bitcoin doesn’t move above $500K within 3 years, he would eat his own genitalia on national television. 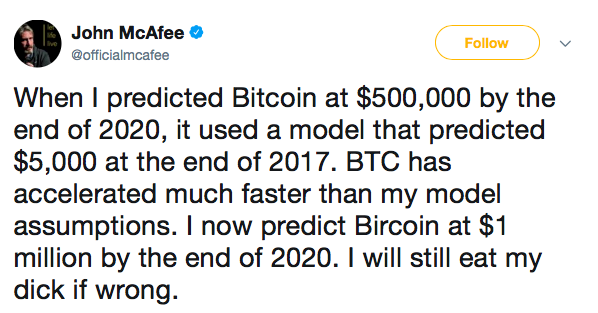 At the moment he is way off track from making a winning case for his audacious prediction. This Bitcoin Price Prediction Tracker shows exactly where bitcoin is, 496 days behind schedule and 90.9% below the targeted price point. 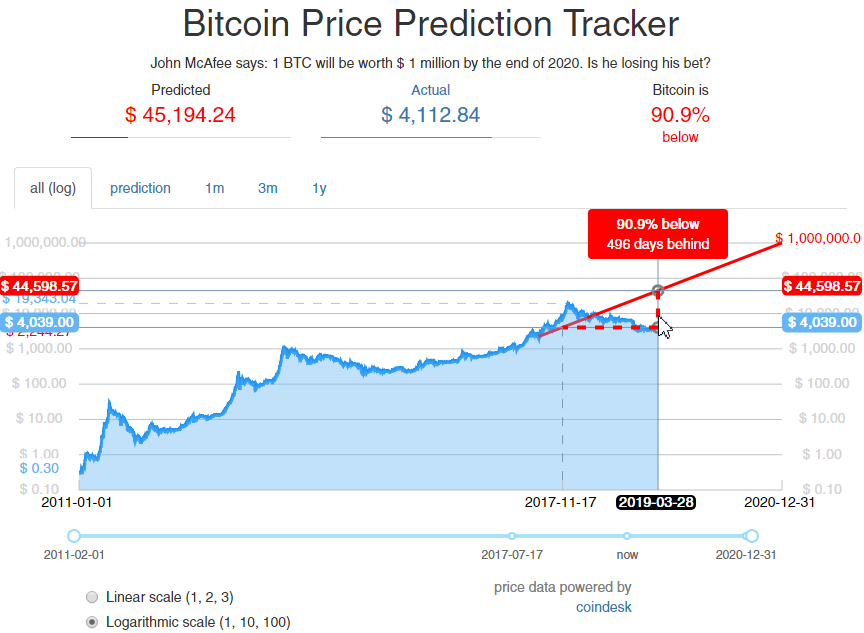 When asked on Twitter whether he’s worried about the prolonged crypto winter that has , he argued that “It’s mathematically impossible for me to lose that bet.”

He believes that like all revolutionary technologies, they take time to play out, but they’d always win, and no power on earth can ever stop the future from happening.

At the moment though, the price of bitcoin should be holding around $44,500 in order to follow a steady path towards $1 million per bitcoin. But like any revolutionary ideas, they don’t always follow a straight path to mass adoption.

Perhaps it would be wise to first learn whether Bitcoin is worth that kind of money in the first place… This Resource Library might help.

While he didn’t give an exact date, he shares the sentiment that bitcoin is currently at its lowest point. He believes that now is the right time to buy & stock up on bitcoin because its dirt cheap.

He commented on WeChat in February echoing another Chinese billionaire, Zhao Dong who states that now is the time to accumulate bitcoin because the “only thing investors need is patience.”

Zhao Dong’s predictions are a little more modest, citing $50,000 per btc by 2021. He explains: “If you and I believe in the future of bitcoin, it’s best to hold as much as possible when nobody cares.” 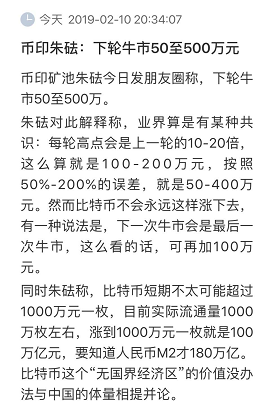 Global income per household is debatable, regardless, $BTC speculative value could be out of reach for most pic.twitter.com/GrmepQyNPp

Aslam a Market Analyst and columnist at Forbes who has appeared on CNBC and Bloomberg believes that the market has hit rock bottom and could surge to more than 10,000% to $400K.

With over a decade of experience in trading Forex, commodities and equities under his belt, Aslam is another Bitcoin bull who has recently suggested that the 15-month long bear market has come to an end, and we’re already seeing signs that the bitcoin price is already picking up.

“there is a high chance that the next bull run has a minimum potential of pushing the price 5 times higher. That is over $100K. I […] believe that each Bitcoin can go up as much as $400K and if history repeats itself, this number is not a fool’s paradise.” 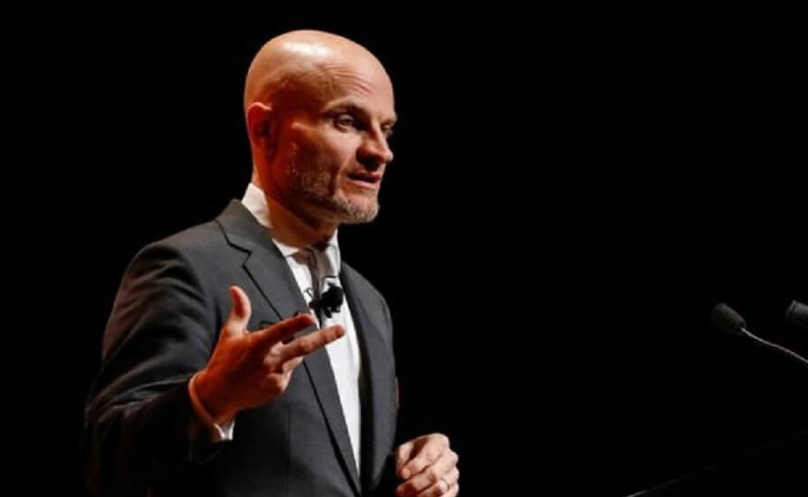 John Pfeffer who heads his London-based investing firm, Pfeffer Capital; went up on stage in the annual Sohn Investment Conference in New York and recommended Bitcoin to some of Wall Street’s best hedge fund managers.

In the 23 years of history, the Sohn conference is where some of the markets top recommendations such as Amazon to Valeant Pharmaceuticals were presented for the first time.

Although he did no give a timeline in his prediction, he explains that he arrives at the figure assuming that Bitcoin completely replaces all gold bullion that’s privately held. That’s around $1.6 Trillion in gold.

The only caveat is that he places the odds of this happening is a mere 1%.

“Bitcoin is the first viable candidate to replace gold the world has ever seen. So, if Bitcoin becomes the dominant non-sovereign store of value, it could be the new gold, or new reserve currency.” – John Pfeffer. 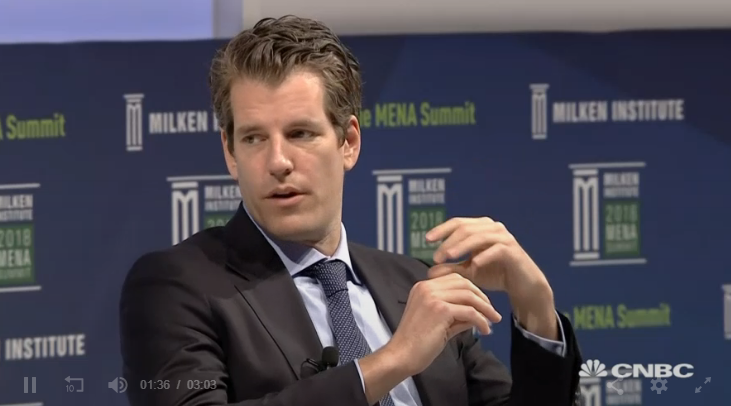 In an interview with CNBC in 2018, he explained that bitcoin could rise up to over 40 times its current price one day.

He hits at critics saying that it’s their “failure of the imagination‘. Bitcoin disrupts gold, and if you look at the properties of gold, scarcity makes gold gold!

Bitcoin is fixed in supply, so in other words, it’s actually better than scarce. What’s more it’s portable, fungible and more durable.

“So if you look at a $100 billion market cap today, now last week it might have been more like 200, so it’s actually a buying opportunity, we think that there’s a potential appreciation of 30 to 40 times because you look at the gold market today, it’s a $7 trillion market, And so, a lot of people are starting to see that, they recognize the store of value properties. So, we think regardless of the price moves in the last few weeks, it’s still a very underappreciated asset.” Cameron said. 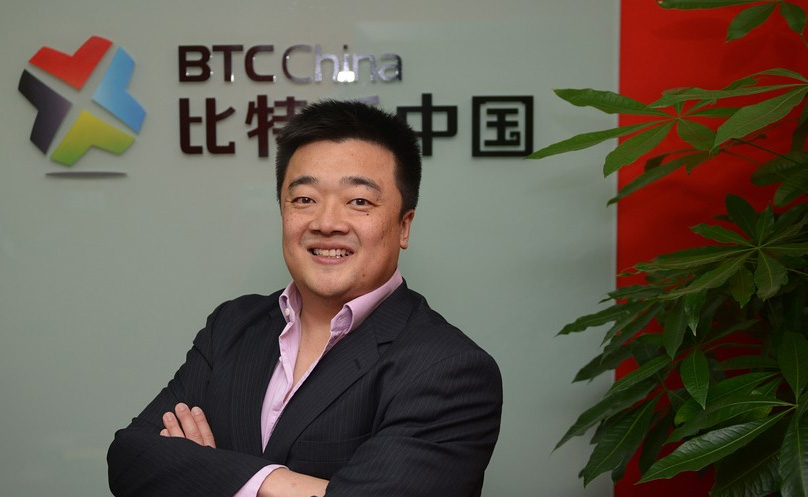 The co-founder of BTCC, a HK-based crypto exchange, Lee who has weathered two previous storms that saw bitcoin fell from the all-time high of $1,200 in 2013 to just $150 in 2015 believes that the current bear market is also reflecting this previous pattern.

Question is, do you have the stomach to weather declines of up to 87%? That is essentially the risk and rewards associated with Bitcoin.

Ultimately, he likes the $60,000 price level as it reflects a total circulation of $1 Trillion which will be a momentous milestone for BTC. After that, Bitcoin will achieve better price stability.

For the long term, he feels that $1 million per btc is not out of reach.

Hodling the Future in Place of the Past “I think bitcoin is the future currency,” ~Tim Draper

Tim Draper believes that Bitcoin is more secure than the dollar. Keeping money in the bank will soon be an anachronism.

Fortune Favors the Brave
More than 30 years since Draper founded his company, with assets of over $5 billion, Tim is now a crypto entrepreneur putting millions of dollars into Bitcoin. Draper snapped up the Silk Road bitcoins auctioned by U.S. Marshals in 2014 and has become a crypto millionaire ever since. He acquired 32,000 bitcoins, at $18 million.

Read: What Tim Draper Told Forbes in an interview during a Tech Summit.

People ask me, Are you going to sell your bitcoin for fiat? and I say, Why would I sell the future for the past? @timdraper”
“I don’t know why anyone would want to go back to fiat when crypto is distributed, secure and global, while fiat is subject to the whims of political forces”. @timdraperClick To Tweet

Tom Lee the founder of Investment advisory Fundstrat provides a positive outlook for Bitcoin in 2019. He states that “many headwinds of 2018 are turning into tailwinds.”

He expects Bitcoin to stage a recovery by the end of the year. At the moment he has reduced his year-end prediction at $15,000 per btc.

Billionaire Mike Novogratz predicts a $20 Trillion market for cryptocurrency that would also place bitcoin’s price well into the 6-figure mark. He adds:

“There’s 118 elements on the periodic table, and only one gold […] Bitcoin is going to be digital gold, a place where you have sovereign money, it’s not U.S. money, it’s not Chinese money, it’s sovereign. Sovereignty costs a lot, it should.”

Although he further explains that it won’t go there in a linear predetermined path. The CEO of Xapo in Palo Alto, California believes that Bitcoin has a huge case to make in his home country in Argentina. There, people are concerned about the local currency being printed out of value unlike the United States.

Casares is also a board member at PayPal, but he bought his first bitcoins in 2011.

He said at Consensus 2017 held in New York that Bitcoin could hit one million dollars as early as 2022, but said that it could be a decade or so before it reaches that milestone.

Another early investor of bitcoin in 2012. At one point he owned as much as 5% of all Bitcoin in circulation.

As the founder of Social Capital and the co-owner of the Golden State Warriors, Chamath predicts that Bitcoin may reach $100,000 in 4 years but it will ultimately touch $1 million in 2037.

He said, “This thing has the potential to be comparable to the value of gold…This is a fantastic hedge and store of value against autocratic regimes and banking infrastructure that we know is corrosive to how the world needs to work properly”

Questions to Ask yourself before Buying Bitcoin

*Disclaimer: This is not investment advice. Investing in digital currencies carries a substantial amount of risk. Never invest more than you can afford to lose.* I own Bitcoin and i’m going long term on this (10-20 years)

Which Cryptocurrency Should I Buy?