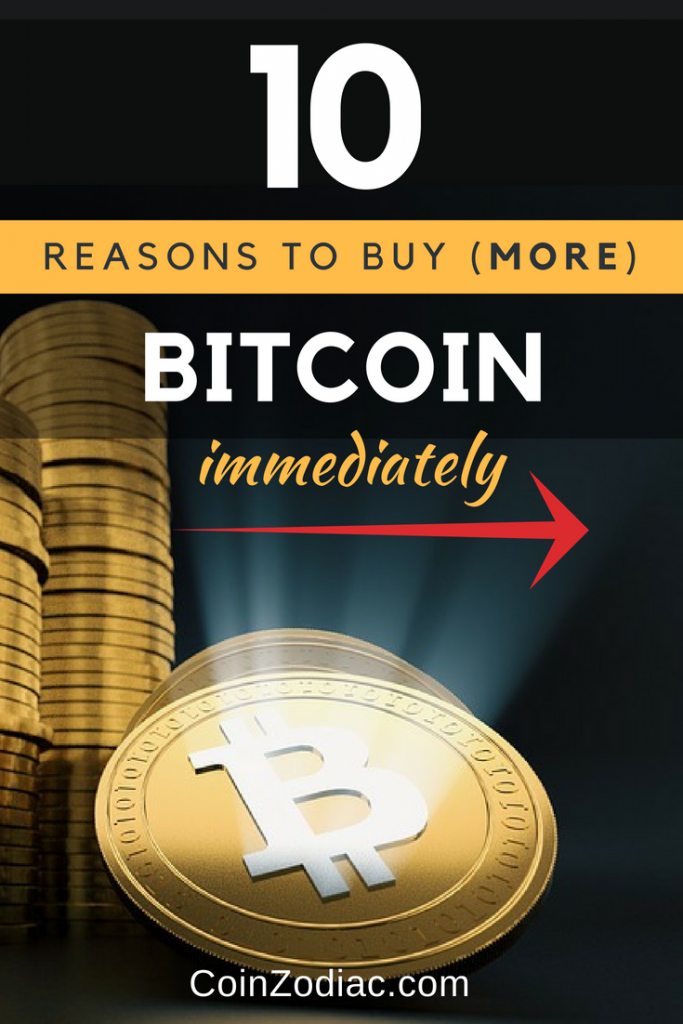 Like any new space, people were oblivious to Bitcoin from the very beginning.

It wasn’t some trendy hype that start out with a bang like Pokemon Go or Gangnam Style and ended up with a whimper.

Nobody outside Satoshi Nakamoto’s circle knew about Bitcoin in the making. Only the most ardent computer scientist within his inner circle were working with Nakamoto through a bitcoin forum.

Most who got interested in the project early on were hobbyist who didn’t care about the money. Most couldn’t see Bitcoin growing to where it is today.

That is why Laszlo Hanyecz spent 10,000 btc on a Pizza back in 2010. He didn’t see the exponential significance of random pieces of data with a limited cap carrying its weight in gold in the digital world. 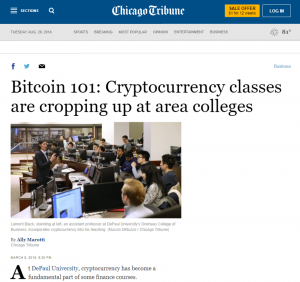 Right now, computer science and engineering graduates are drawn into the idea of a new digital gold rush. Even classes about Bitcoin are being taught to high school kids. Clearly, there’s a generational component that drives the space.

These are fresh graduates and talents who are no longer intrigued by the idea of joining companies like Google, Facebook, Amazon or even Apple.

LinkedIn also estimates that there are now 28 times as many people citing cryptocurrency and bitcoin in their profiles compared to 2013.

We’ll start to see more and more startups positioning themselves to utilize the blockchain in a manner that’s more transparent and decentralized. Doing so would inevitably give them the competitive edge to disrupt legacy systems.

If you’re still on the fence about bitcoin and cryptocurrencies, here are another 10 reasons why now is the time to buy and HODL for the next 5 to 10 years. 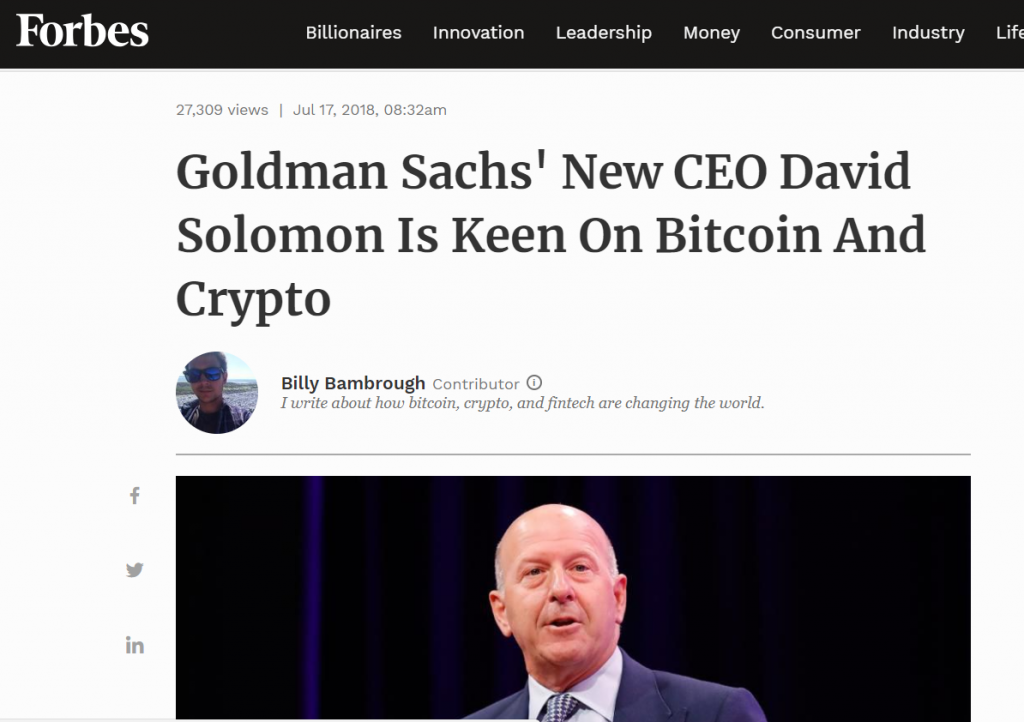 David Solomon—the new CEO of Goldman Sachs—says that the firm has to evolve in order to adapt to new environments. He believes that Bitcoin could be a huge opportunity for the company.

That is a sign that their clientele is asking them about Bitcoin.

Susquehanna, the 12th largest trading firm by volume is trading Bitcoin and Ethereum. 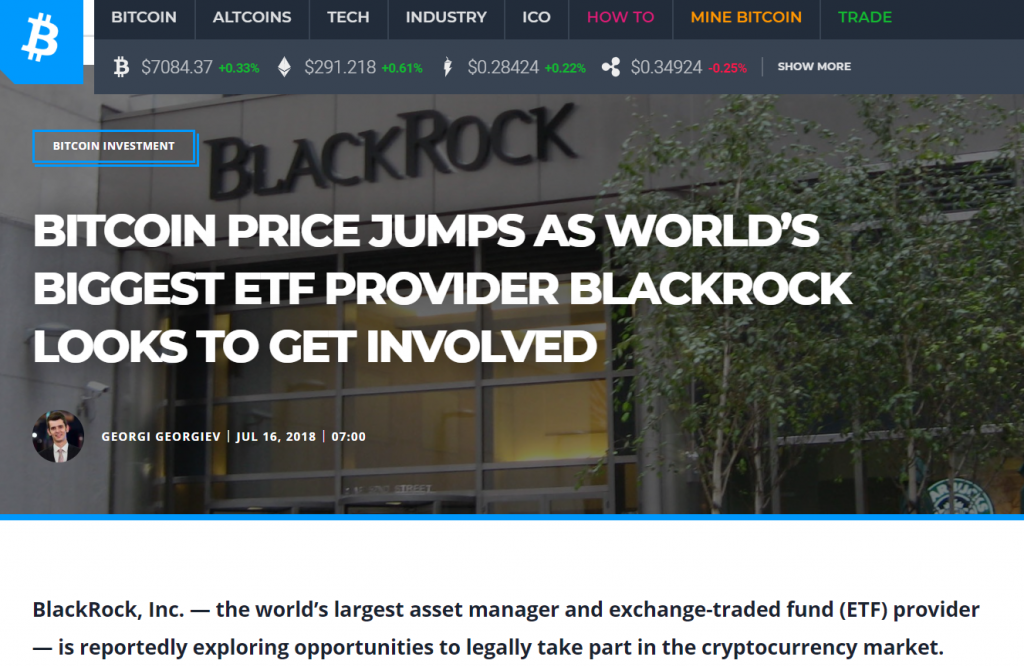 BlackRock, the world’s biggest asset manager with over $1 Trillion dollars of assets under management, has announced their intentions to launch a Bitcoin ETF.

You see, everyday mom and pop investors hear a name like Blackrock but cannot understand the underlying significance of this. For wall street and traditional investors, this is the kind of news that turns a bearish market, bullish.

Blackrock cannot simply afford to sit on the sidelines any longer and see their competition moving towards the Bitcoin and other cryptos. They are also quickly losing their money managers and young talents to the crypto space.

Vishal Karir, a senior figure in the firm was overseeing an upwards of $1.5 billion worth of assets, but left the company for a cryptocurrency platform. Adam Grimsley and Michael Wong — two of BlackRock’s money managers — also resigned earlier this year to launch a cryptocurrency hedge fund.

#2: The Man who kick-started the whole internet revolution in 1994 is now doing the same for Bitcoin. 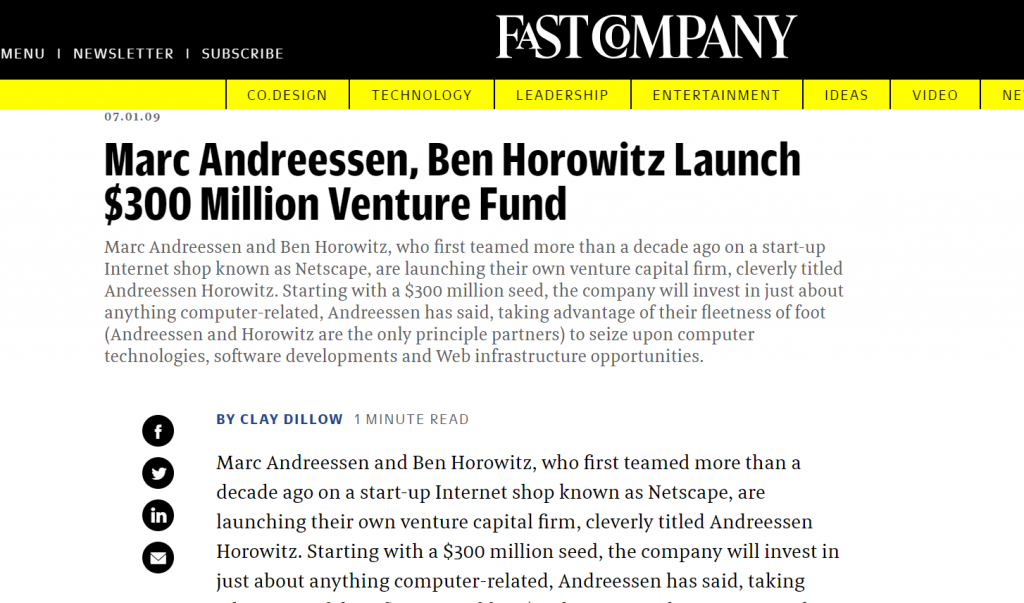 The #1 V.C. firm in Silicon Valley, Andreessen Horowitz which invested early in Facebook, Skype, AirBnb, and Coinbase—has doubled down on its commitment to cryptocurrencies, by launching a $300 million crypto fund.

The general partner of the firm called a16z also states that they won’t be deterred by market conditions, and will continue to focus on investing in crypto-powered services with ‘practical use cases” until it reaches out to millions of people.

Andreessen Horowitz also structured the funds to hold their investments for a minimum of 10 years.

This is the kind of smart money you have to follow if you ever want to profit from your investments. Stop listening to financial gurus and trading experts have to say, start following what they do.

#3: Thomson Reuters is set to track the Top 100 Cryptocurrencies 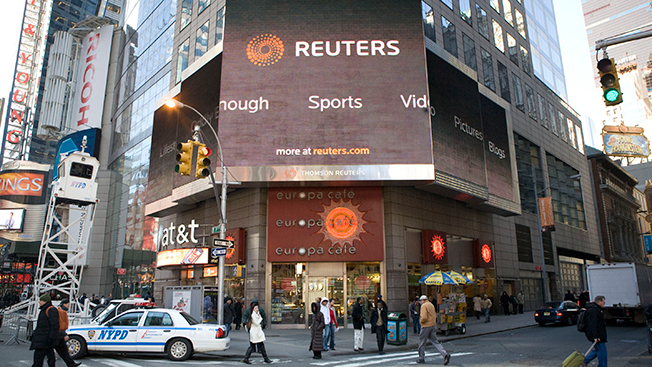 One of the biggest news and information provider in the world is now analyzing key themes, data and market sentiments to understand the price trends for the top 100 cryptocurrencies.

Thomson Reuters also indicated that 1 in 5 financial firms will begin trading cryptocurrency over the 3 – 12 months.

What’s more interesting is that they acknowledge that cryptocurrencies are unique and that their sentiment analysis would require understanding terms like FOMO, HODL, etc. 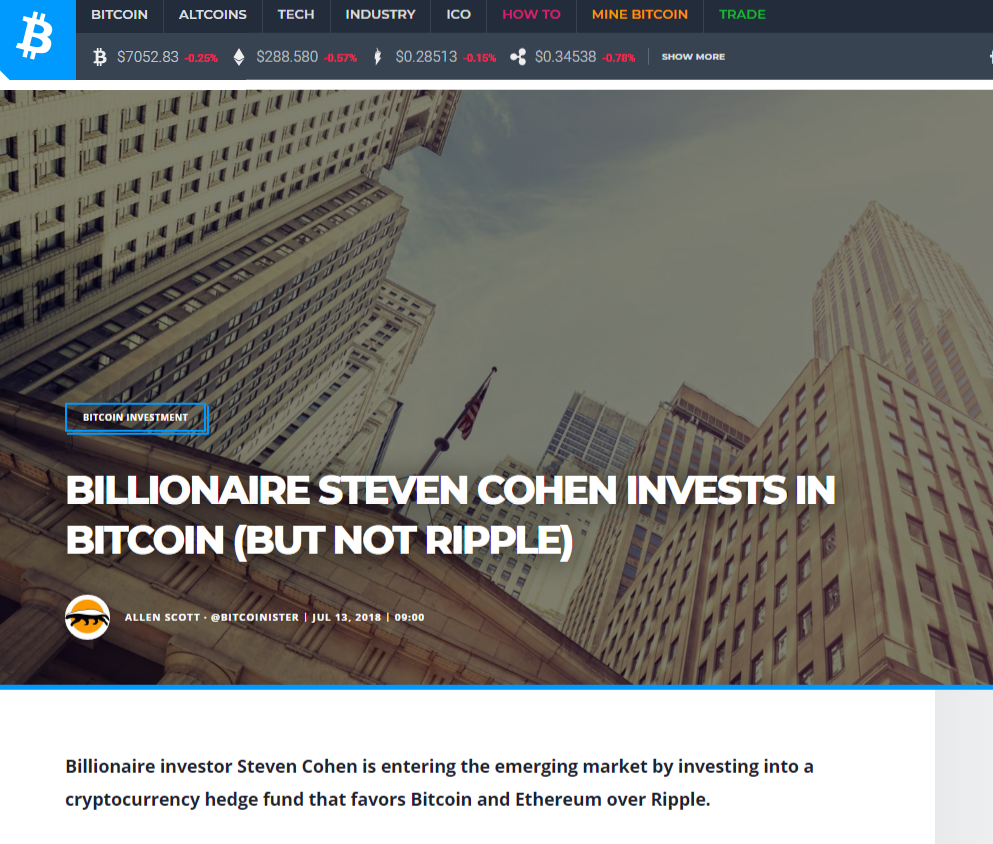 Steve Cohen is one of the big and smart money who’ve just bought Bitcoin for the first time very recently.

He sees the long term potential of both Bitcoin and Ethereum but seem to be concerned with the level of centralization on ripple.

Former Goldman Sachs partner, Mike Novogratz has invested 10% of his net worth into cryptocurrencies. He says it would be “almost irresponsible” not to invest in cryptos.

Tim Draper who made over $1 billion by getting early on Twitter, Skype, Tesla had this to say: he told Forbes: “In five years, if you try to use fiat currency, they will laugh at you. Bitcoin and other cryptocurrencies will be so relevant… there will be no reason to have the fiat currencies.”

#6: People who said Bitcoin was a “fraud” and “bubble” are backing down… 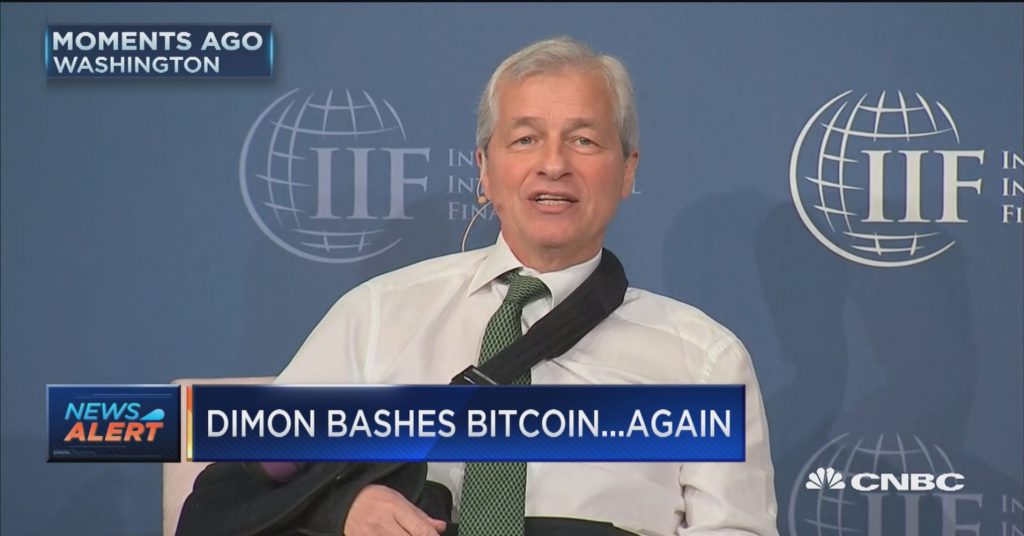 For example, George Soros calls crypto a “bubble” then 8 weeks later it was reported that he gave his $26 billion family office the green light to buy them.

Jamie Dimon threatens to fire his employees if they were caught buying or trading bitcoin. Then after the price dips, bought millions of euros worth of Bitcoin ETNs.

In fact, JP Morgan and Morgan Stanley bought roughly 3 million Euros worth of Exchange-Traded notes, a popular vehicle for institutional investors to speculate the price of commodities, goods or services. 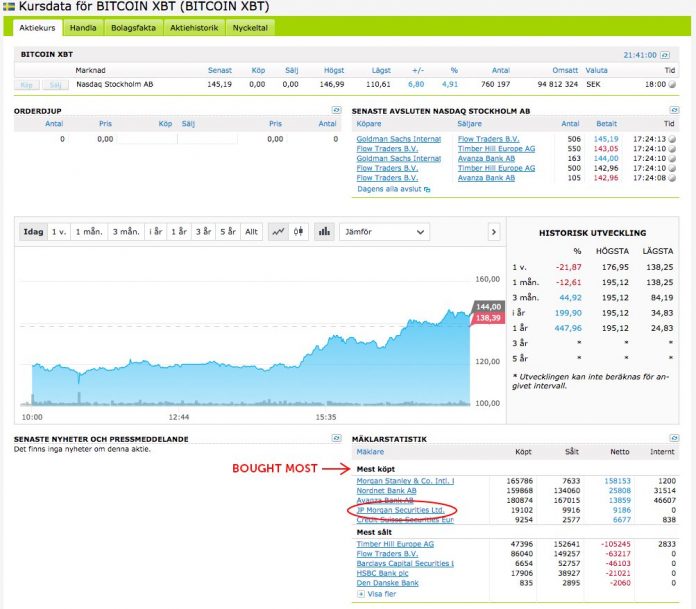 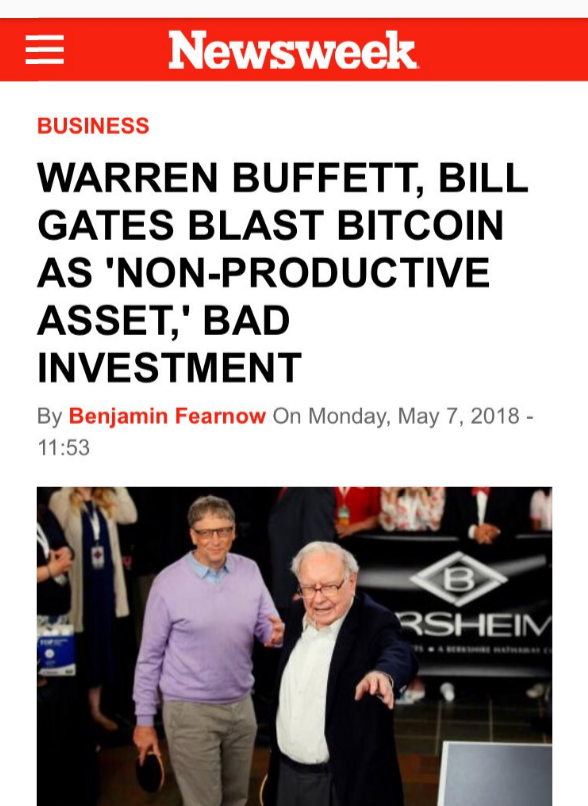 Why are the smart old guys calling bitcoin a fad, even as bad as rat poison. Why are they so touchy on the subject when they’ve made billions of dollars from the traditional financial system?

Haven’t they made enough already?

Well, it turns out their companies are heavily invested in traditional brick and mortars that extends deep into the underlying economy.

And since they don’t invest in things they can’t understand, they’ll stand to miss many great opportunities of the 21st century.

He also refused to invest in Google and Amazon when he was given the chance to get in early.

That’s why I think he’s so sour on Bitcoin. He’s lost his magic and his ego and pride is obscuring his vision.

In 1994, Bill Gates was quoted as saying, “I see little commercial potential for the internet for the next 10 years.” So having smart billionaires say dumb things about emerging technology is nothing new.

#8: Bitcoin ETFs will Ultimately get Approved 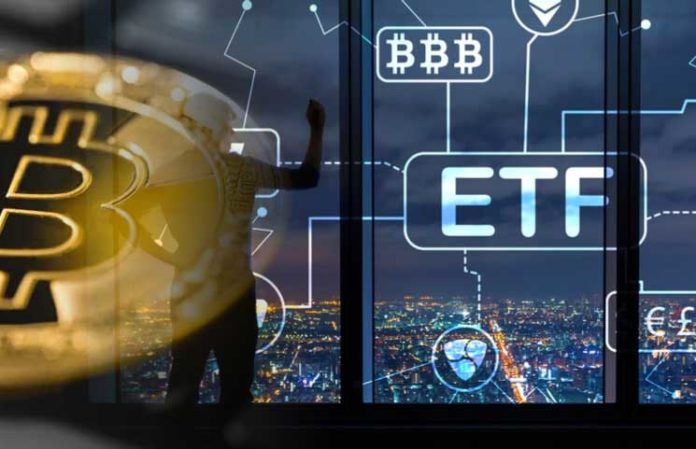 There’s tremendous appetite for Bitcoin ETFs from institutional investors that will push the market way up.

Right now, dozens of new ETFs are being rejected by the SEC because of the lack in transparency from big custodial exchangers like Coinbase. This could change with the CBOE ETF filing that may happen in the first quarter of 2019.

While Bitcoin doesn’t need ETFs to thrive. Having ETFs would exposemany traditional investors to bitcoin with the push of a buy button within their trading accounts.

Bitcoin is a game of accumulation. Like the ultimate digital land grab. Even If you invested $100 in Bitcoin, and hodle it for the next 5 to 10 years (forget about it). The fraction of the bitcoin you own (satoshi) will still be a fixed portion of the 21 million bitcoins ever in existence.

Your $1 dollar on the other hand may be worth just a few cents in 5 to 10 years. Wealthy people never store all their wealth in dollars. 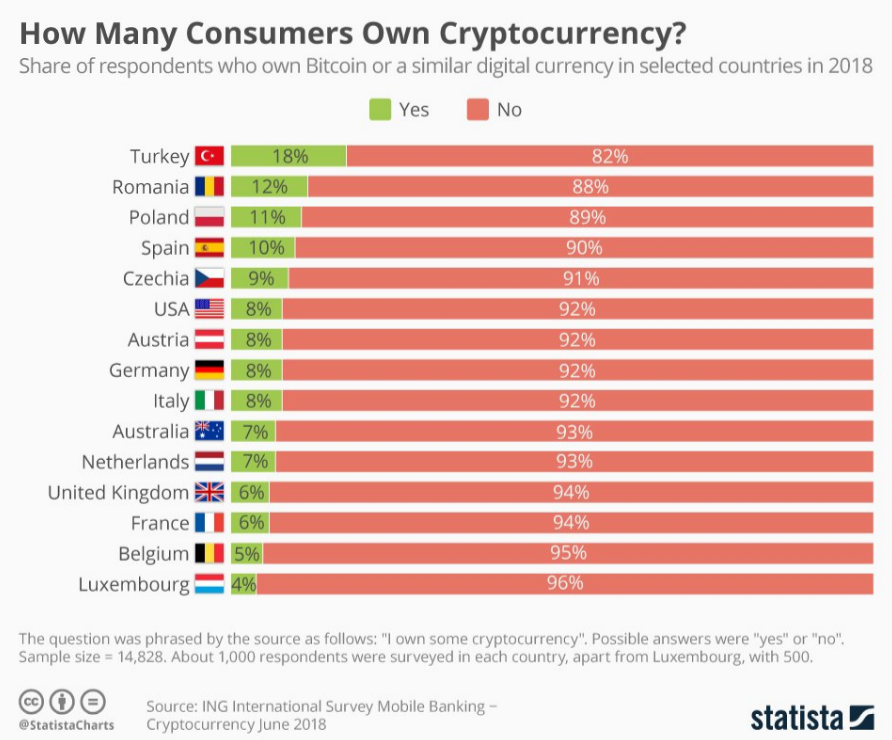 Every fiat currency has ended in devaluation and eventual collapse, right from the Roman Empire in the 1st century AD to modern times.

There are 152 fiat currencies that have failed due to Hyperinflation. Their average lifespan was 24.6 years and the median lifespan is 7 years. Don’t get left behind, Peru, Chile, and Argentina are breaking $BTC exchange volume records this summer.

When there’s a gold rush, get your pickaxes ready. Don’t Take All This Information for Granted. Start learning why, by following my tweets.

Cryptocurrencies are the new gold. Coinbase, one of the largest cryptocurrency exchanges, supports more accounts than Charles Schwab.

All over the world, new breeds of companies are working behind the scenes to provide infrastructure and services – pickaxes – to power the cryptocurrency and bitcoin boom.

Decentralized currencies and tokens are supported by “miners”, who use their computers to process transactions in exchange for fees.

The most efficient miners make the most money🤑, which means the battle to buy graphics cards and computer hardware is fierce.

Graphics card manufacturers are exploding. Nvidia, whose GPUs are popular with miners, has exploded.

If you wanted to exchange your dollars for crypto in 2011, you’d have to arrange a meeting with someone from Craigslist at your local Starbucks. Sketchy.

Today, exchanges like Changelly, Binance, CashApp, CoinMama and LocalBitcoin allow you to buy and sell safely in minutes.

Learning about every new token launch is a full-time job, just like following the stock market.

Did you know you can start your own Cryptocurrency index fund?

Want to start Buying Some Satoshis? Here’s How …

11 of the Best Ethereum Wallets to Thwart Hackers (2019 Edition)