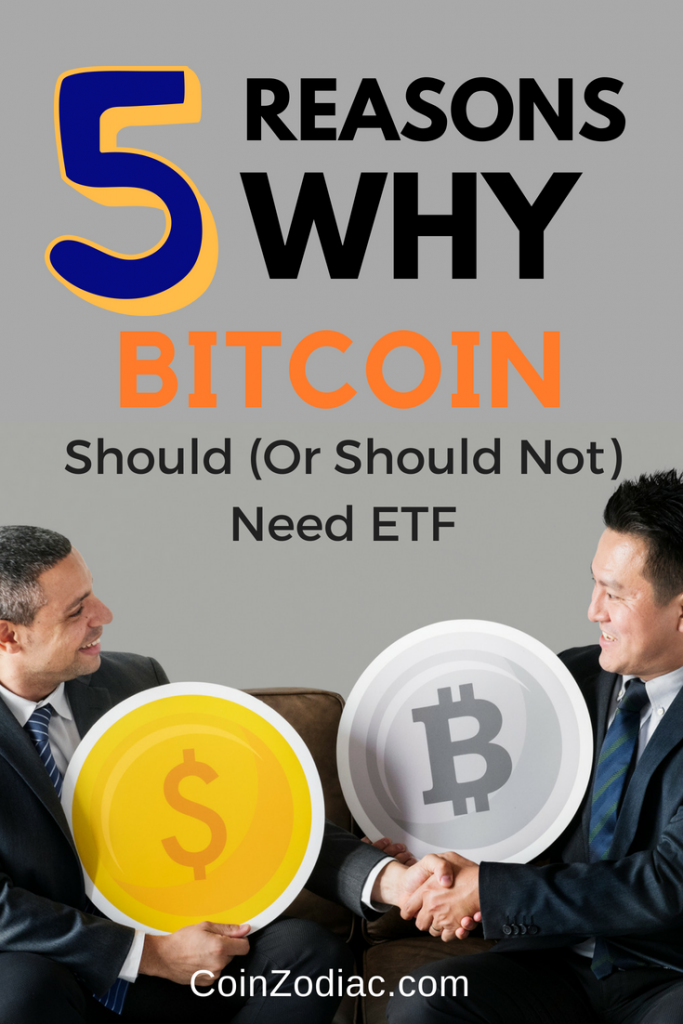 Bitcoin started taking the world by storm last year and ended up catching the attention of retail as well as institutional investors.

Currently, regulatory headwinds suggests that Bitcoin ETFs will soon be approved even though they have been rejected by the SEC multiple times.

For those who’ve entered the space late,

What is an ETF?

An ETF is an exchange-traded fund that relies on a custodian or a manager.

Bitcoin Will Make Some People Very Rich, Others very poor with the Bitcoin ETF. Find out why…

The custodian creates a special financial instrument that can be traded like a stock.

A bitcoin ETF is quite different. The manager which has a fund, invests in Bitcoin (hold the real btc) and then proceeds to create shares of this bitcoin reserve to represent the price of bitcoin as a stock. Then people can buy this stock through their brokerage account like trading on the stock exchange.

The end in mind here for Bitcoin ETFs, is that it allows traditional investors to speculate on the price of bitcoin with the protection of the regulatory environment & the simplicity of pushing a button inside their accounts.

A custodian has to be well-insured and protected for the SEC to allow Bitcoin to be traded as an ETF.

Sounds familiar? Like a bank holding gold in exchange for promissory notes just before the US government abolished the Gold Standard.

ETFs: A billion-dollar “not your keys, not your bitcoin” opportunity for non-technical institutional investors.

Things like private keys, wallets, addresses, blockchain, hardware tokens, and many other terms seems too vague, complicated and scary.

That’s why the ETFs are seen as a way to dabble in the Bitcoin market without first understanding how all those complex things work.

Everybody is so excited about it, especially for the people who are in the financial markets because it simplifies the entire process substantially. As what we’ve seen in the gold markets, an ETF created an influx of new investors which gave rise to a drastic price increase in the price of gold.

Meanwhile, ETFs in commodities have long been seen as a way to increase the likelihood of institutional investors to manipulate the prices of commodities.

If you’re taking away the complexities of holding your own Bitcoins, you’re also opening yourself up to a whale of professional traders and speculators who are only concerned about making a chump out of everyday retail investors.

Whatever the original intention, bitcoin ETFs will morph into an asset whose only purpose is speculation. That is its fatal flaw as an Exchange-traded fund.

Or, rather, that is just one of them. The other flaw is that the custodial or manager in charge of the real bitcoins now carries all the responsibilities and rights: It now operates independently from the government’s fiat currency, replacing the status quo with another. What I call a tyranny of brilliance.

You see, as someone who holds the private keys to bitcoin, I hold more rights and responsibilities than someone who is purely trading on an exchange or who owns an ETF of bitcoin.

How I use my bitcoins, for example, choosing which exchange to use, or if I even want to use an exchange. Or picking up fork coins because I have the original keys is like a “vote”. It empowers the holder and allows them to influence the direction of the ecosystem.

The voice of the majority always wins.

In holding and controlling all those bitcoins for the majority of people, these funds or custodians will now have a very large influence, a very large voice or vote.

In fact, we’ve already encountered various situations like that in the past.

Mt. Gox is a very good example. The trustee of all the recovered bitcoins dictated the terms of every single customer who left their bitcoins inside before it got hacked.

A single person had all the power and responsibility for billions of dollars worth of bitcoin owned by thousands of people.

Contentious debates in scaling and hard forks also saw large custodial exchanges influence the direction of the entire ecosystem with their voice.

Companies like Coinbase can decide and act on the behalf of tens of millions of customers whether they decide to support or go against a proposal.

Having said that, there’s certainly nothing wrong with having Bitcoin ETFs. It will give many traditional investors in stocks, commodities and bonds to access bitcoin, but it won’t give them a voice.

That voice will be held on by a custodian.

That custodian will be speaking on behalf of all the people who’ve invested in them. But all those people won’t have a say in it. And that could potentially be a very bad thing.

What if there’s a new change being brought forward by bitcoin developers for a more private, anonymous and confidential transaction, only to be shot down by the custodian for fear of being implicated by the authorities.

Of course it won’t necessarily mean the end of Bitcoin, but it would create all kinds of new problems and divergences in the network as a whole.

If they’re not your keys, they’re in principle, not your bitcoins.

That’s why ETF’s are a multi-billion dollar vehicle for a new kind of centralized governance. There’s enormous appetite for these kinds of things because it is in our DNA to fill in the seat of the throne even if its obviously better not to have one.

Eventually, very rich and influential people are going to pressure the SEC until they finally give in to ETFs. It’s inevitable.

Right now there’s still a technical barrier when it comes to buying and holding real bitcoins. But we have made huge strides.

7 years ago, hardly anybody outside of the technical circle of miners and developers knew how to get their hands on bitcoins, let alone understand what its all about.

Eventually, there will be two different types of investors.

The ones who had invested time to educate themselves on buying and storing their bitcoins in their own wallets, and in doing so, gain true financial independence; versus ETF investors who just rely on their fund managers to speculate on the price of bitcoin.

Unfortunately, for the latter; investors will inevitably be fooled into endless hypes and over-promises giving them the illusion that they have a trusted entity looking out for them.

When it comes to money, the very rich and powerful only care about their pockets. You can’t blame them for wanting to line their own pockets when you’re too stupid to take responsibility for your own money.

And as history has proven, trusting someone with all your money always leads to a path of sorrow and regret.

It’s not too late to learn or to discard our old knowledge and skills.

Knowledge only begins with the acknowledgement of ignorance.

Those who can embrace being a beginner again will be rewarded immensely for years to come.

Remember, money is more valuable when it is scarce, and less valuable when it is abundant. When given an option, the wealthy will always choose to store their wealth in truly scarce materials and goods. So should you…
Tweet
Pin261
Share1
262 Shares
Tags
Andreas Antonopoulos Bitcoin ETF Investment money Trading