When everything seems to be going against you, remember that the aeroplane takes off against the wind, not with it. – Henry Ford 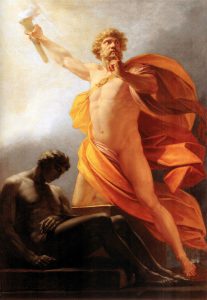 Satoshi Nakamoto stole the knowledge of money and gave it to the people in the form of Bitcoin.

When Prometheus stole fire from the heavens and gave it to man, he was deemed a treacherous criminal. Chained to a rock and having his liver eaten out by birds every day is the kind of punishment that send shivers down your spine. Install fear into every living creature.

Thinking about stealing fire is easy, but it proved to be a little more complicated than that. Nevertheless, Prometheus through his wit and intelligence found a way to trick the gods into a melee and sneaked fire down to Earth.

Nakamoto understood his role. He stole the idea of money from The State. That is why he chose to remain anonymous and leave Bitcoin for good.

The sacrifice was great. But it changed humanity forever. Ignited the fire of freedom. And man grew smarter.

Over time, we saw that happen with electrification, the automobile, flight and the internet. Each faced violent opposition from the former establishment and its incumbents.

They were sparks that led to a quantum leap in human evolution. Today, we’re witnessing another unfolding before our very eyes. 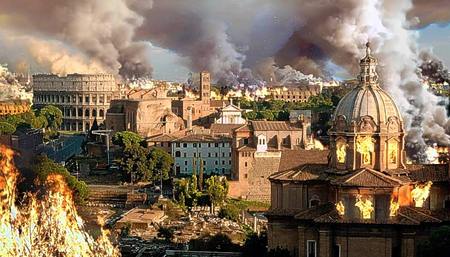 Rome was so degenerate by the later stages of the 5th century that its “fall” eluded the notice of most people who lived in it.

Similarly the oil lamps that lit the streets of large cities became obsolete and replaced by ‘highly volatile’ electricity.

The horse and buggy replaced by the “noisy” automobile.

The telegram made a relic by the internet.

It’s the same with money. Money evolves over time. Easy money dies and is replaced by a better one.

Many things used to be money; cattle, shells, stones, beads, metal, plastic and paper. Now bits of information of 1s and 0s denotes how much money we have.

In the past, society converged and agreed that gold was the best form of money. Scarcity ensured “Unforgeable Costliness”. The reason was simple, no one could ever produce more gold out of thin air even if want to.

Unfortunately, gold has its flaws too. (To understand how we arrived at that conclusion, read about the history of monetary debasement.)

Horse and buggy people believed that automobiles need to be backed by horses. pic.twitter.com/GLGyT4vRQZ

Today, we’re drowning in a sea of fiat money. Dollars can be marked up in a computer inside a private bank to magically produce numerals in the trillions with just a click of a button.

Can you imagine we work our whole lives just for that kind of money? And Pay taxes. Why do we need to pay them when they can create trillions out of thin air?

To understand why the rich get richer, while the poor become poorer in this monetary environment, you need to understand the most important four letter word in our economy, Debt.

Essentially, debt is used to enslave poorer people while the rich use debt to lever up and get even richer.

There are debilitating societal consequences from excessive debt. And it comes from the obligation to borrow money in order to participate in the economy.

One of the reasons? Income growth failing to keep up with the soaring cost of  fundamental needs such as shelter, healthcare and higher education.

Can you imagine your boss telling you for 34 straight years that you’re never getting more than a 0.00172% raise each year?

No wonder people are so angry and stressed!

They’ve been going to work, year after year, but instead of earning more over time, they’ve actually been earning less, in terms of what their income can buy. 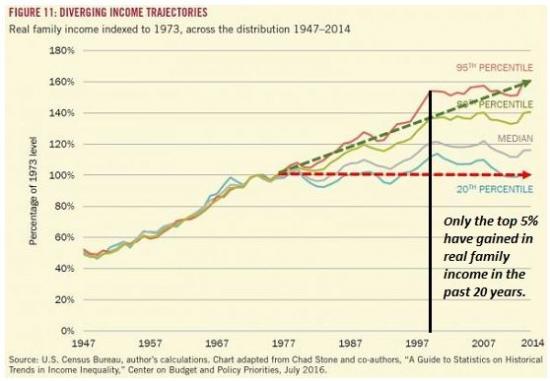 Despite the boom in the economy and financial assets over the past 30 years—which boosted the wealth and incomes of the wealthiest people alive (even wealthier than kings and kingdoms) —average people are now worse off than they were decades ago.

And so, they’ve been forced to borrow more and more money just to keep up.

You can see that in the data. But, you probably don’t even need to.

Just think about your friends and people you know, and how much more debt these folks have to take on, just to keep their heads above water.

For instance, home prices have been rising faster than their income in most places, which means low interest rates doesn’t help.

Low interest rates just allows them to barely purchase a highly inflated asset to live in by taking on a huge chunk of debt. An asset that could quickly become completely unaffordable should the economy go belly up.

The oligarchy uses debt offensively (to increase wealth and power), while the masses must use debt defensively (to survive). If more people understood precisely how the game is rigged at the highest level (financial system) we might get somewhere.

This is happening right now, as the global economy is being shut down to prevent the spread of Covid-19.

And the government can only think of this solution: Print trillions of dollars and throw the kitchen sink at the economy and also stealing our buying power through inflation.

Then you have masses taking on more debt defensively just to keep going and avoid falling further down the socioeconomic ladder.

Debt doesn’t empower the majority of people, rather, it turns them into modern day indentured servants endlessly stuck on a hamster wheel with little to no hope of getting off.

This is not an accident, it’s a tried and tested tool which, when combined with incessant mass media propaganda, is an effective way of creating a submissive, confused and desperate underclass.

Many people understand this by now, but what’s far less understood, yet potentially more significant, is how the wealthy uses debt.

In ancient times, the ruling class lashes the whip to force masses into submission. But the hearts and minds were beyond its reach.

In modern times, debt is used as a tool of money to keep the masses in invisible chains.

Why is it so damn effective?

First, because it’s easy to entice a population and get them to chase after “the next shiny thing“, something they can hardly afford to keep them on a leash.

Second, debt issued by private banks, allows them to magically create more money out of thin air. This is called fractional reserve banking. Only now, banks are not required to keep any reserves. They can magically issue debt and get you to pay the principal plus interest back.

To the banks, more debt equals more money. And they don’t have to work hard for that money. You’re giving them that power. Our government is.

Debt is leverage. It allows entrepreneurs to take on risk and be rewarded if successful.

But now, debt has become something else entirely.

The explosion in wealth inequality over the past several decades is due to this weaponization of debt.

If you’re very wealthy and connected, access to extremely cheap debt is virtually unlimited, and this access is used to make leveraged bets.

The U.S. shouldn’t bail out billionaires and hedge funds during the coronavirus pandemic, Social Capital CEO Chamath Palihapitiya says. “Who cares? Let them get wiped out.” https://t.co/dIbizumtqG pic.twitter.com/u8BSVvr0B1

And if it doesn’t turn out profitable, these same corporations would simply request a bail out. Again, your tax dollars is at work.

This is happening right now…

This time it’s not just the banks. It’s the travel companies, airlines, entertainment, colleges, and many more looking for a handout.

Why don’t they deserve a bail out?

Well they were basically dumping profits back into their own stocks instead of keeping a rainy day fund. They were gambling. No R&D, innovation or adding value.

These top executives were deliberately choosing to enrich themselves. Why should your tax dollars go into bailing them out for their lack of foresight?

Americans now have more than $1.5 trillion in college debt, for example. Look at this incredible chart:

And it’s not just college loans that have soared.

Being in debt is an incredibly stressful way to live.

You’re in a hole and there is simply no way out. So it’s no surprise that deaths by drugs and poisoning for the bottom 60% of American’s population have doubled since the year 2000… and suicide rates have doubled as well over the same period.

Lesson 5. SAVE MONEY: RU NUTS? Why save money when QE FED counterfeiting is printing trillions of fake dollars-$82 billion a month to $125 billion a day? Why save when ZIRP, zero interest policy pays losers zero? Save gold-god’s money or Bitcoin-people’s money.

This is incredibly sad—and it’s unfathomable that this is happening in every developed nation.

Unfortunately, the problem is only going to get much, much worse.

You see, tens of millions of people are desperate. They have no way out. And sooner or later this hopelessness and desperation are going to lead to violent and radical politics.

And this enormous political powder keg, is leading to THE biggest political event our world has seen in a century.

“The reason I endorse bitcoin is just for one freaking reason: you’re not part of the system,” said Kiyosaki in conversation with Anthony Pompliano, Morgan Creek Digital co-founder and the host of Pomp Podcast.

The point is the present system cannot endure. Borrowing trillions of dollars to paper over this failure won’t work for much longer. We need a new system, or we’re well and truly doomed.

This is what Bitcoin is for.

Bitcoin isn’t for getting rich. It’s for protecting you from them.

How to Escape the Rat Race (And... the Origin of New Year's Day)

Countdown to the Best Cryptocurrency Exchange in 2020