If you follow Bitcoin closely, you probably came across the latest Blockstream software called the Liquid Network. This network pegs to BTC (1:1) at any given time on a separate blockchain.

The Liquid Network (L-BTC) provides a feature and option to Bitcoin owners who hold large amounts of BTC to transfer faster and more privately than on the Bitcoin blockchain itself. Imagine a layer sitting on top of Bitcoin using a distributed trust model.

The word ‘Liquid‘ here — is key. Cryptocurrency Exchanges in certain countries like South Korea has significant premiums of at least 20% leading up to the bull run last year because there is a lack of liquidity.

The Bitcoin listed on South Korean exchanges such as Korbit and Bithumb were priced 20% higher than other markets. The lack of volume in South Korea drove the prices up significantly and fiat currencies cannot flow out of the country due to strict capital controls.

Using the Liquid Network, exchanges will now have more bitcoin liquidity which they can then use it to transfer more Bitcoins confidentially and almost instantly to feed the demand in their respective markets. This also prevents front-running, people banking on arbitraging Bitcoin to make the difference.

For example there were Hong Kong traders who used to fly in and out of Seoul, South Korea in order to make more money from selling their Bitcoins there.

For traders, liquidity is extremely important. Traders always had to trust an exchange with their coins (custody) while trading on them. So now the difference is, you’re trusting a federation exchanges comprising of 23 members:

So with the Liquid Network Sidechain, you have a group of members who need to vote on a transaction that requires (1 + 2/3; 16 or 17 members) majority in order to approve.

In essence, the Liquid Network is a Sidechain that provides the market with more Bitcoin liquidity to everyone around the world and in doing so, even out the prices globally.

Bitcoin is already the most secure & decentralized blockchain. No one needs permission to use the Bitcoin network to send or receive BTC. Most importantly, no one can censor or impose a sanction on you for that.

The trade-off for this means that Bitcoin has to be rigid by design.

Therefore, a second or intermediate layer called a Sidechain is implemented to add some valuable functionality and features to sending transactions.

The Liquid Network calls this a Federated Sidechain because it requires trusting a set of members to guarantee the security of this blockchain which is pegged to Bitcoin’s blockchain (1:1).

To transfer $BTC onto the #LiquidNetwork #sidechain via the 2-way peg, the BTC is deposited into a multisig peg address. After 102 confirmations, $LBTC is transferred for the user. To peg out onto the #Bitcoin #blockchain, only 2 Liquid confirmations are required. ⛓️ pic.twitter.com/MPIegqeOuV

Furthermore, the Bitcoin blockchain takes 10 minutes or so for 1 confirmation when you transfer your BTC. For the majority of users, a confirmation of 6 times is safe enough. But for extremely large sums of BTC, it’s safer to have many more times of confirmation (100 times is standard practice).

If you’re waiting for the Bitcoin blockchain to confirm a 100 times, you will have to wait hours. Transferring it to the Sidechain to receive your (L-BTC) token, the equivalent amount in BTC, you only need 2 confirmations to complete the settlement, which means you can settle in minutes.

Users can also effectively transfer their BTC in and out of the Liquid Sidechain at anytime but this shouldn’t be considered a long term cold storage solution for you if you’re a hodler.

Explain Liquid Network to a Dummy

Now imagine if you’re an Over the Counter (OTC) Desk, and you want to send 10,000 BTC to an exchange like Bitfinex. You don’t want anyone knowing who you are, so you can do so privately.

In the future when Liquid Wallets are released, traders like you and me would also be able to move L-BTC on and off an exchange to hardware wallets in a moments notice which reduces risks of theft.

Q: Will Liquid dilute the Value of my BTC?

It’s a peg, so you can’t have L-BTC tokens if they are not pegged with BTC.

Whats-more, it’s a public network, with many new features forthcoming like full-node businesses, block-explorers, libraries and green-address wallets that allow L-BTC to be transferred and stored.

You have to trust the Liquid Federation. The L-BTC token is issued on a nascent Sidechain which is a blockchain lacking in network effects and mining power compared to Bitcoin’s blockchain. That’s why a super-majority vote between the 23 members is required to approve a transaction.

The Bad and the Ugly unforeseen circumstances – This need for more mining power to secure the Sidechain could mean collusion between super-miners that create mergers in the near future. Hence, a possible future security hole if miners grouping together would have more power than any full node in the network.

Bitcoin is Trustless & decentralized, meaning you don’t need to trust Adam has the money he said he has, you had to trust the bank that Adam uses to send it to your bank account. And in turn, your bank verifies the legitimacy of that transaction.

The system is designed so that nobody has to trust anybody else in order for the system to function.

Bitcoin’s Proof-of-Work mining power is the most secure blockchain in the world. Over time, security improves exponentially. But with newer blockchains like Liquid, this is not the case.

You just have to have faith in the Liquid Federation, and hope that you are well represented and protected.

For the majority of people we trust banks or intermediaries like PayPal to keep a ledger of all the transactions on the internet. Given that trust, central banks run on a fractional reserve basis that literally prints money out of thin air.

Could Sidechains like the new Liquid Network create a new kind of banking system for the rich and powerful?

Even Satoshi believes that second layer functionality on top of the Bitcoin blockchain is the only way to improve interoperability and scalability.

It is part of the bigger and broader blockchain ecosystem.

It’s more commercial and that could be a good thing.

You don’t have to use it, if you don’t like it.

If you like to read it later, Pin it! 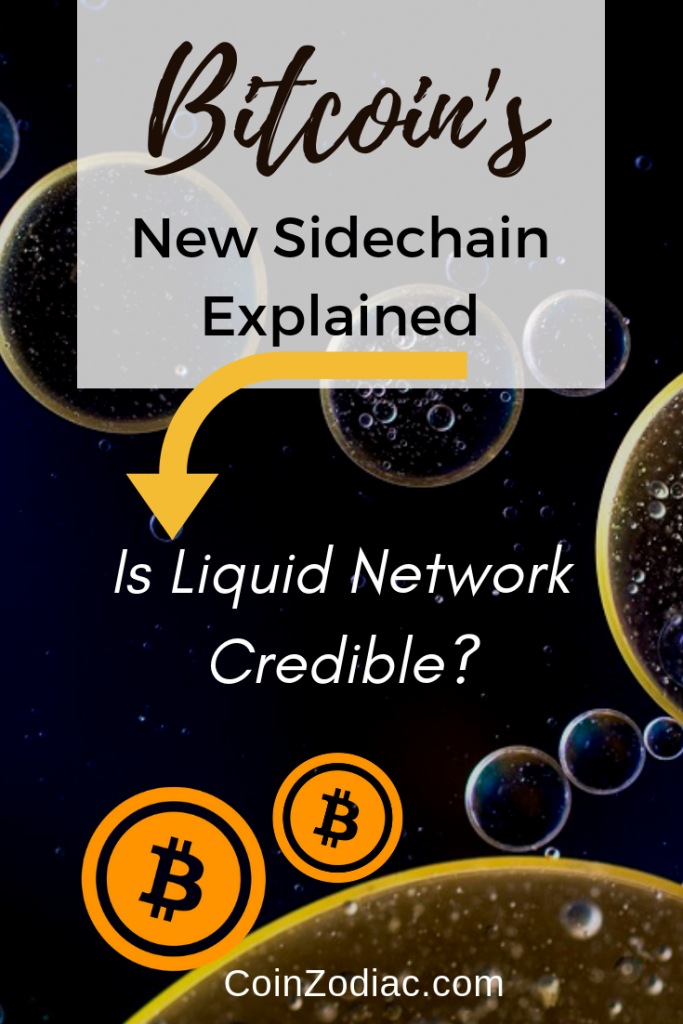 Brave Browser: A Scam Or A Blockchain Search Engine that Really Pays You?