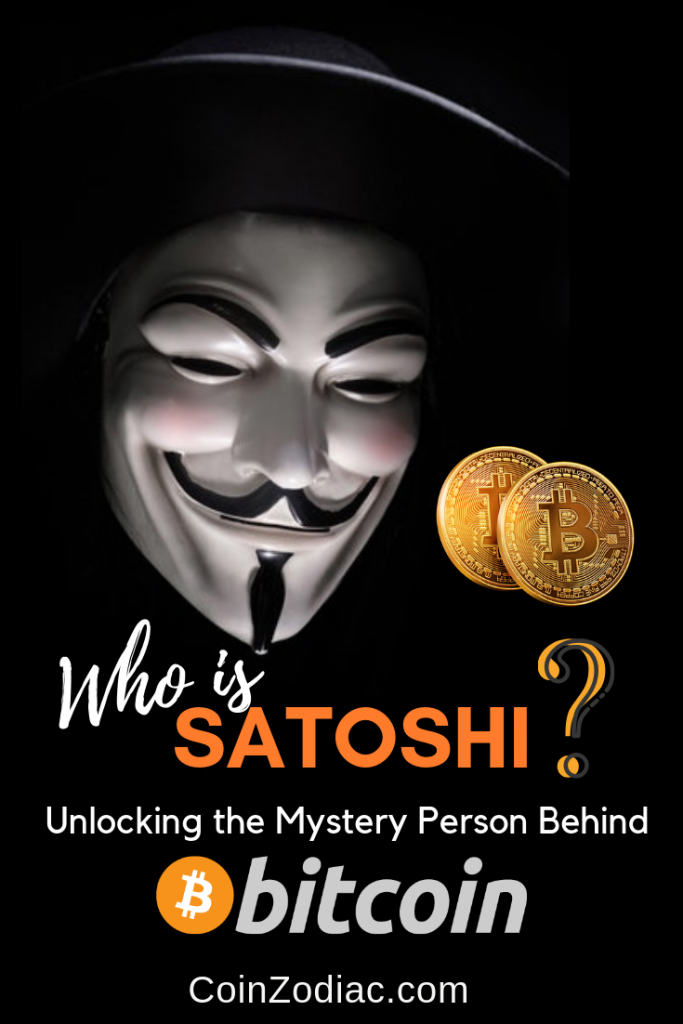 I wonder if in a 1000 years, there will be a biblical like story on Satoshi Nakamoto.

His famous first words were; “I’ve been working on a new electronic cash system that’s fully peer-to-peer, with no trusted party.”

He then went on to put a link to a white paper he had written about Bitcoin.

The rest, as we all know today, is history.

When he decided to leave the project in 2011, he left the world without unmasking his true identity.

Beneath Satoshi’s mask lies an idea.

And ideas like these, never ever die once it catches on.

This idea is about a Decentralized Monetary System, by the people and for the people.

“We are told to remember the idea, not the man, because a man can fail. He can be caught, he can be killed and forgotten, but 400 years later, an idea can still change the world.” ~V for Vendetta:

Who Could Satoshi be?

Is it Dorian Satoshi Nakamoto? a Californian Engineer unearthed by a journalist working for Forbes.

Andy Greenberg found that Dorian Nakamoto was just living a few blocks away from Hal Finney, a computer scientist and early Bitcoin pioneer working on cryptography. 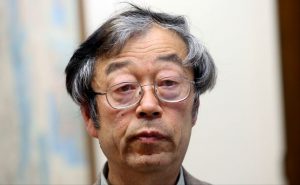 Dorian however doesn’t seem to have a single clue about how Bitcoin works. He vehemently denies any ties with Bitcoin.

“I have nothing to do with bitcoin. I never worked for the company, I don’t know any people there, I never had a contract there or anything like that. I wasn’t even aware of the product”

A redditor however sums up a theory that Dorian is in fact the persona used by Hal Finney;

“I think he [Dorian] is the real person after whom the Satoshi persona was named. The coincidence of having a Satoshi Nakamoto living 2 blocks away from Hal Finney’s home is just too improbable to be ignored.

Hal and his cypherpunk counterparts intended for this old friendly retired man whose house had been foreclosed by banksters to be the symbolic figure behind the financial renaissance on behalf of all the victims of the modern financial system. Satoshi is Dorian and I think it’s just fine that way.”

However, Finney denies being Satoshi. An investigative journalist examined Finney’s email correspondence with Satoshi, along with their Bitcoin wallet history and came to the conclusion that Finney ≠ Satoshi.

Hal Finney passed away on August 2014 in Phoenix. His body was cryopreserved by the Alcor Life Extension Foundation.

The last time Satoshi appeared online was in April 23, 2011, where he emailed Mike Hearn, one of the developers he worked with, stating, “I’ve moved on to other things. It’s in good hands with Gavin and everyone.”

We haven’t heard from Satoshi ever since, until much recently…

After years of absolute silence, a cryptic 4-letter word was posted on one of Satoshi’s account associated with his email [email protected]. 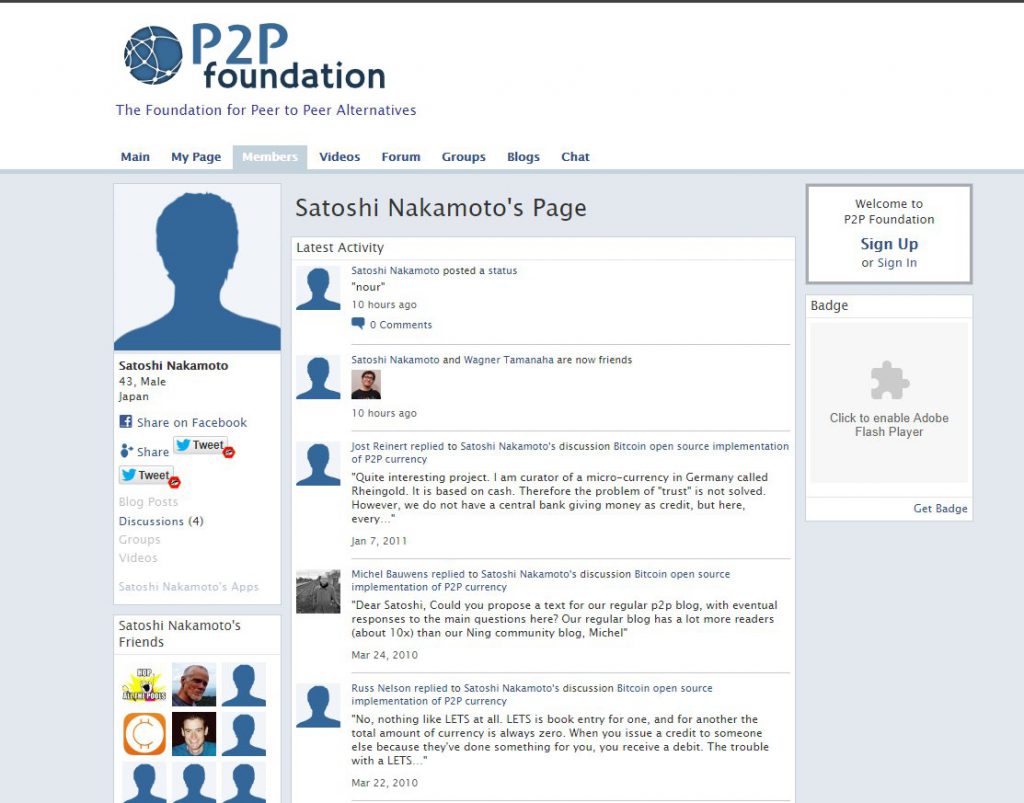 The word was: “Nour”

According to the Urban Dictionary, “Nour” means:

The most loving, affectionate and caring person you’ll ever meet. Extremely smart, funny and sensitive. A bit lost, still figuring out what she wants in life and how to reach it. Stubborn and not willing to take other peoples advice. when she smiles she makes you forget all the problems you have, her hug will give you an assurance that you have never felt and will never do. To know Nour is to know life in a totally different perspective.

Aside from the 4-letter word, the account also shows that Satoshi befriended a user named Wagner Tamanaha, a Brazilian with Japanese ancestry based in Sao Paulo, Brazil.

Tamanaha has a Bachelors degree in Advertising and Communication, graduated in 1986. He doesn’t seem to know any coding but did delve into Bitcoin in 2011.

Tamanaha posted this his personal blog in Portugese:

“The first time I heard about blockchain and Bitcoin, I understood almost nothing, it was 2011 and it was just nerds, but I downloaded software and thought I was already mining, participating in a decentralized processing chain worldwide and helping the movement in SETI @ home style (Search for Extraterrestrial Intelligence, late 90’s internet fever). I did this and forgot.”

But it is quite possible that the email associated with that account [email protected] has been taken over by someone else.

The Origins of Satoshi Nakamoto

Satoshi Nakamoto as translated by one of the Redditors could be interpreted as “Born from the Ashes of Centralization.”

He also established the Bitcoin.org website where he uses his pseudonym to communicate and collaborate with other developers.

Throughout the years, none of the developers working with Nakamoto ever knew the true identity.

The brilliant computer scientist/cryptographer/cypherpunk is considered a genius by many after solving the “Double-spend problem” & “Byzantine Generals’ Problem”.

These were the holy-grail of computer sciences.

Everything about Nakamoto is mysterious and Sherlock’s all over the world have been trying to uncover the person behind the mask.

Back in the early days, before Bitcoin was anywhere near popular; Satoshi mentioned these prophetic words: “Well it’s 21 Million coins for 6.8 Billion people, so just grab a few”

Who would have figured?

And Laszlo Hanyecz who paid 10,000 BTC for two large pizzas in May of that same year.

Today those pizzas are worth of whopping $40 Million.

According to Hanyecz who worked with him early on as a developer, calls Nakamoto a bit of an eccentric fellow who gave him a weird kind of feeling.

I thought bitcoin was awesome, and I wanted to be involved, but I had a regular developing job. Nakamoto would send me emails like ‘Hey, can you fix this bug?’ ‘Hey, can you do this?

He’d say, ‘Hey, the west side’s down,’ or ‘We have these bugs — we need to fix this.’ I’d be like, we? We’re not a team. I thought that it was approval from him, that maybe he accepted me as a member. But I didn’t want the responsibility. I didn’t really understand all of the forces that were going on at the time.

Hanyecz who famously bought the pizzas for 10,000 btc in 2010 also found Nakamoto’s requests for his services to be annoying.

Unfortunately, he said that Nakamoto always maintained a strict privacy.

He or she or whoever it was never told me anything personal. I asked a few questions, but he always dodged them. Those questions never got answered.

Claiming to be Satoshi Nakamoto 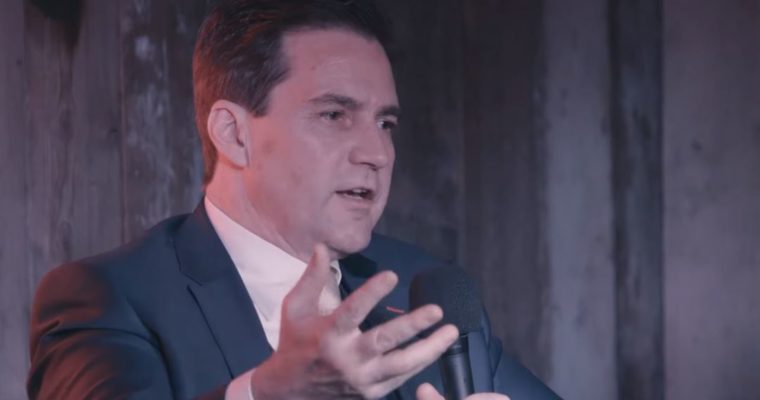 Between 2015 and 2016, Craig Wright, known in the Cryptoverse as CSW for Dr. Craig Steven Wright, claimed to be the infamous Satoshi Nakamoto.

Media outlets including the BBC and The Economist broke the news that CSW was able to prove that he is in fact the one and only Satoshi Nakamoto.

This ‘so-called’ proof was backed by Bitcoin core developer Gavin Andresen who was one of the earliest people to work with Nakamoto.

In spite of that, there is general consensus that CSW was able to fool Gavin and the others with fake signatures.

This was supported by Vitalik Buterin who voiced out vehemently in public during Deconomy 2018, calling CSW a fraud.

Vitalik calling Wright a fraud was nice and all, but Joseph Poon (@jcp) saying “I wrote the lightning network whitepaper and still didn’t understand your talk” was the real cherry on top. https://t.co/p3b0EjpQro

Buterin, the Ethereum founder who got his start working to add implementations to Bitcoin also condemned CSW in public, saying,”Why is this fraud allowed to speak at this conference?”

His remarks was then applauded by a large section of the audience.

You can check out the drama in the video below:

The majority of Bitcoiners with the exception of CSW’s loyal supporters find that Wright’s claim to the throne is nothing but a lie.

Buterin has repeatedly called Wright out in public on twitter, discrediting his work and antics.

My bulls*** meter appears to be showing a negative value…. oh wait that was an integer overflow.

If CSW is who he claims to be, the real Satoshi Nakamoto, he would actually be able to technically prove it by moving some of his BTC. This is estimated to be in the region of around 1 Million bitcoins.

One bitcoin today is worth about $4,000, which would put his net worth at around $4 Billion.

Until today, he declined to give any further proof, aside from demonstrating that he had access to the cryptographic keys linked to the same blocks of bitcoin Nakamoto sent to another cryptographer, Hal Finney.

Buterin stated the possibility that CSW could have simply proven his identity by doing 1 of 2 simple things.

If you’re the owner of the private keys, this is something even you can easily accomplish, which any non-tech user can verify as hard-evidence.

But instead, he chose an indirect approach which many experts claim isn’t absolute and undeniable proof that he is Nakamoto.

Until then, you should remain highly-skeptical of anyone claiming to be Nakamoto.

Bitcoin vs. PayPal & Banking - Why One is Dying a Slow Death

Top 20 Decentralized Exchanges on the Planet (Latest DEXs in 2019)