A lot about technology bounces back and forth between two extremes.

It’s either a macro historical force acting over decades or it’s a matter of micro trends lasting just a few years.

Upsetting the status quo always results in the strongest and most violent of opposition.

Many will despise innovations that undermine their dominion of power.

This is human nature.

500 years ago, courtiers advising the duke of Burgundy would have demonize innovations that undermined feudalism.

But looking back today, historians deem the same innovations as the spark that ignited the Renaissance.

Renaissance mean “Rebirth” or simply; coming out of the dark.

History is written and rewritten time and time again.

It is often written by the victors.

Likewise, many decades from now; what may seem to be far-fetched, downright absurd or frightening may very well be seen as a new Renaissance from 22nd century eyes and beyond.

If you take foresight seriously: If you really begin to think hard, you can understand and make plans for a future lasting 10, 20 years or more

…and that’s how you have to think to thrive in the decades to come.

It will not be easy.

If you’re currently thriving in this system, you may be offended by this new technology.

You will react unpleasantly.

But for those who are disadvantaged and ostracized by the current system will fully embrace technologies that liberate the mind. 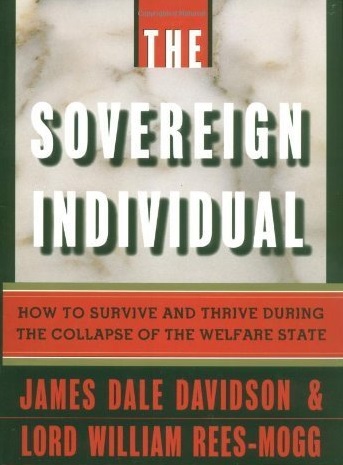 In the last decade, Bitcoin had demonstrated that possibility by giving billions equal financial opportunity.

A decade earlier, two audacious authors published a book in 1997 that described Bitcoin in eerie similarity, 11 years before Satoshi Nakamoto.

A Journalist who was Ahead of His Time.

Lord William Rees-Mogg, A Maverick thinker born in between World Wars; precisely in 1928, first began thinking about the Information age and cybermoney in a time when most people couldn’t care less.

He received education at Charterhouse School and Balliol College, Oxford and started his notable journalistic career in 1952 at the Financial Times for 8 years.

Seen as a pioneering yet radical investigative journalist of his time, Rees-Mogg was never afraid to speak out. During the tenure of John Major as prime minister, he wrote a piece in The Times describing Mr. Major as unfit and lacking in self-confidence.

He was audacious, prophetic and great with words. He wrote economic gems and bragged about the gold standard. Then at 67, he met James Dale Davidson, an investment guru who shares a similar view about the harsh world.

In over 300 pages, Lord Rees-Mogg and his co-author, James Dale Davidson, predicted the information revolution and how it would liberate individuals at the expense of nation-states.

The book was published in 1997 and its theme was driven at talented, self-reliant and technologically adept individuals who would ultimately reinvent themselves and conquer the frontiers of cyberspace.

This idea did not go down well with the mass majority. Lord Rees-Mogg published the book at a time where there was an air of optimism and prosperity. His book was far too overdramatic.

He was inevitably predicting the end of nations in the book, “The Sovereign Individual.”

7 years after he died, Alastair Campbell, Tony Blair’s right-hand man called The Sovereign Individual, “The Most Important book you have never heard of…” He discussed the book in great detail in his blog and claimed that a new group of individuals will emerge out of the chaos and disorder…

Billionaire, Peter Thiel who co-founded PayPal calls The Sovereign Individual the most important and influential book he had ever read. It led him and other billionaires to prep for the future collapse of liberal democracies by buying properties across the Pacific.

Angel investor, philosopher and entrepreneur Naval Ravikant who’s backed over a 100 companies wrote an inspiring blockchain tweetstorm based on the Sovereign Individual thesis that reflects how this new technology is fulfilling all of the book’s epic prophecies.

Lord Rees-Mogg calls inflation a disease of excessiveness. He said, “There are other such diseases such as anarchy, tyranny and cancer … economic order can only be restored by giving gold a central role in the world economy, which has been out of fashion for decades.”

It wouldn’t come as a surprise if he were still alive today that he would be a huge proponent of Bitcoin.

He wrote: “Paper money has contributed significantly to the power of the state, not only by generating profits from depreciating the currency, but by giving the state leverage over who could accumulate wealth.”

Individuals will be able to use cybercurrencies and bypass central banks and governments, thus declaring their monetary independence…

The dark secrets of money:

Do your own research. Proceed with caution.

He also hinted under the chapter “Revenge of Nations” that the world’s wealth will be transcended by mathematical algorithms that have no physical existence.

In a time when the phrase cryptocurrency isn’t coined yet, he predicted in the book that “Cybermoney controlled by private markets will supersede flat money issued by governments and that only the poor will be victims of inflation.”

Today, Bitcoin fits his description perfectly and allows anyone the possibility of trading across borders without a bank account on the internet. Is this the new money of free speech?

He adds, “Inevitably, this new cybermoney will be denationalized. When Sovereign Individuals can deal across borders in a realm with no physical reality, they will no longer need to tolerate the long-rehearsed practice of governments degrading the value of their money through inflation.”

Why should they? When people eventually wake up from the idea that Bitcoin is sound money, they will no longer store their wealth in state issued currency.

There’s more power and control to switching over to a currency that has a predetermined supply. Any individual who learns and understands Bitcoin intimately would ultimately achieve their own monetary independence. 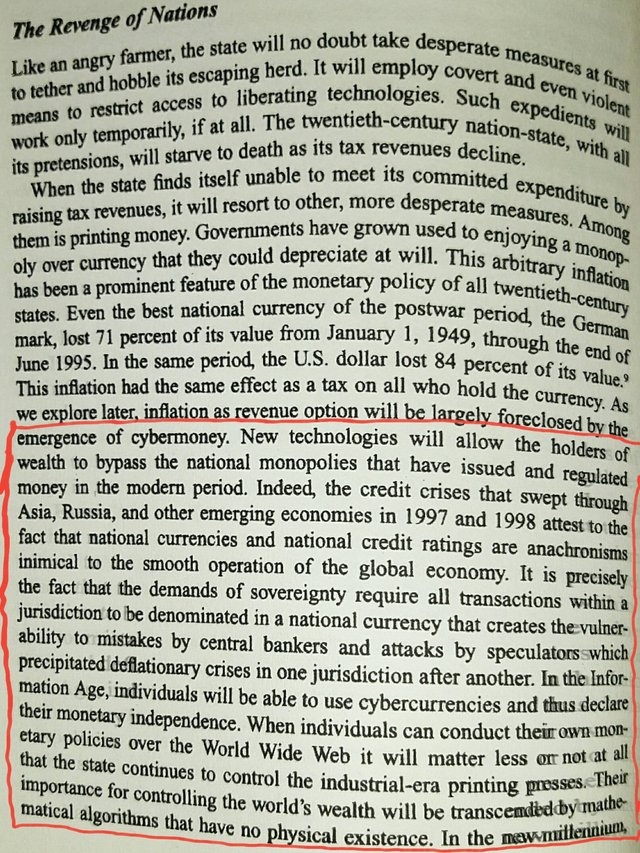 Bitcoin has a real potential to impact 4 billion people in the world who still can’t trust their leaders or even have the privilege to access financial services to trade globally.

For many, Bitcoin is a new way out, not an investment scheme to make more fiat money but as a vehicle to migrate to a global marketplace where your race, your looks, your age, your sexual orientation doesn’t matter.

In this new crypto-economy, everyone are equal and are blessed with color-blind anonymity.

While you may have the privilege to access banking today, don’t let the public notion of speculation, fraud and greed in the cryptocurrency space stop you from learning more about Bitcoin.

Disruptive technology is often a double edge sword. You know what the “experts” call the internet in the early 90s, they call it a fad. Then as more and more people started using the internet, they started calling is evil by labeling it with pornography, drugs, scams, etc.

Today, we’re seeing the same thing with many respected and brilliant people calling Bitcoin “poisonous”, “toxic”, a ponzi scheme, a tulip craze, drug money and the list goes on. 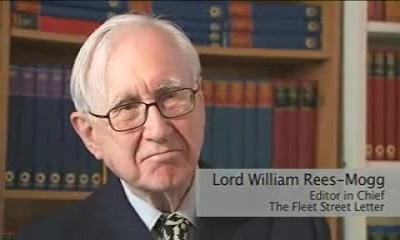 One of the greatest challenge in life is knowing enough to think you’re right but not enough to know you’re wrong.

Bitcoin’s radical price movements are just a distraction. It is at an early stage of trying to disrupt trillion dollar industries like the entire banking system, governments, insurance, finance and so much more.

Crazy ideas doesn’t follow a strict linear path, it’s often highly volatile. There is still less than 1% of people who own Bitcoin or cryptocurrencies. Bitcoin’s market cap is like a guppy in a tank filled with great white sharks.

So far, reading The Sovereign Individual is like gazing into a crystal ball.

In crazy exact detail, they explain:

This new digital form of money is destined to play a pivotal role in cybercommerce.

It will consist of encrypted sequences of multi hundred-digit prime numbers. Unique, anonymous and verifiable, this money will accommodate the largest transactions.

It will also be divisible into the tiniest fraction of value. It will be tradable at a keystroke in a multi-trillion dollar wholesale market without borders…

If they’re right, you should buy and hold some Bitcoin today as a hedge against this uncertain future.

You can always pass it down to your children knowing that 1 btc will still be 1 btc decades from now. Your local currency on the other hand will most certainly lose its purchasing power over the years.

Follow my Tweets to learn my latest insights. Learn more about Bitcoin at CoinZodiac.com/bitcoin